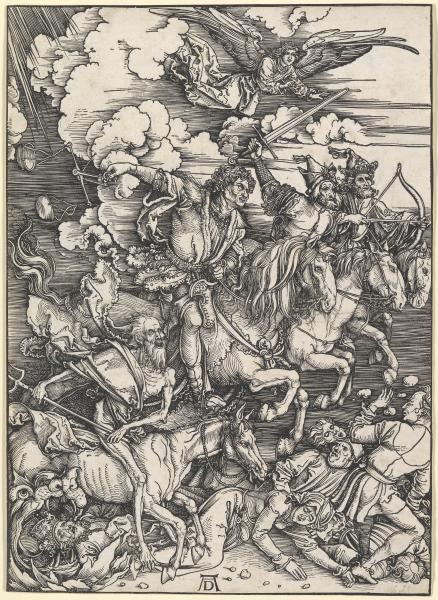 ‘This week in politics’ via  Albrecht Dürer, The Four Horsemen of the Apocalypse, from The Apocalypse, published 1498, woodcut. National Gallery of Victoria.

In this chaotic moment of uncertainty (ahem) with no government in Australia perhaps we might have to return to arts funding arrangements of yesteryear and inspire artists with… cows. Amanda Smith of RN has this story about the history of arts funding in Australia in which she reveals that the first arts grant was in the form of two cows ‘from the goverment herd’ given as payment to nineteenth-century poet Michael Masset Robinson for a series of ‘odes for George III and Queen Charlotte on their birthdays.

In other signs of the apocalypse (though admittedly this was reported on the eve of the election) an artist has managed to hang his own painting on the wall at the NGV next to Picasso’s weeping woman. The artist, Ben Butcher, declares that ‘We live in an age where monolithic cultural institutions no longer have a monopoly over the distribution of ideas. Media that was once only accessible to a privileged few is now freely available to the masses, and direct action and self-publishing are now unprecedentedly possible.” Though why this requires the painting to be in a ‘monolithic cultural institution’ like the NGV rather than somewhere else isn’t really clear. The tension between rejecting institutions and wanting to be represented by them continues.

Gina Fairley has a Fact Check in ArtsHub looking at the merger of the Sydney College of the Arts and the UNSW Art & Design school. She observes that there is no concrete plan for a ‘school of artistic excellence’, this seems to be at this stage merely an ‘intention’. She also quotes former ‘SCA Associate Professor, Merilyn Fairskye who says “The merger should more correctly be termed a “termination”, as merger it is not.” Fairskye continued that UNSW Art and Design’s campus in Paddington is an ‘overcrowded, spatially under-resourced inner-city premises, and to “merge” students, staff and studios is a physical improbability.’

More trouble for the National Gallery of Australia over their collection of Indian Sculpture, with evidence mounting that another two sculptures may have been channeled through a smuggling ring. The works in question are an 1,800-year-old limestone carving showing a scene from the life of Buddha, and a 12th-century statue of the Hindu goddess Pratyangira. The NGA has announced they are working with experts and says the sculptures had already been identified as having suspect provenance and ‘it is certainly possible they will be returned.’

The Auckland Art Gallery is calling on people around the world to ‘look under their beds and poke in their attics’ in an effort to locate more works by the artist Gottfried Lindauer, who is best known for his Māori portraits (below). ‘According to Professor Ngahuia Te Awekotuku, a Māori historian and academic at Waikato University, many of Lindauer’s Maori subjects paid the artist to paint their portraits, because his works were a widely respected symbol of mana (prestige). “They were an incredible status display, and Māori were really into status displays,” said Te Awekotuku. “The idea that Maori chiefs sat there passively being painted is not accurate at all. They commissioned many works themselves, and those portraits have been handed down through the generations.”’

Dr Vanessa Russ, associate director of the Berndt museum at the University of WA calls for a space to display its collection of Aboriginal Art. The Museum at “has one of the most culturally significant collections of Aboriginal art and objects in the world. But right now those objects are packed away in storage boxes and containers in rooms at the university.” 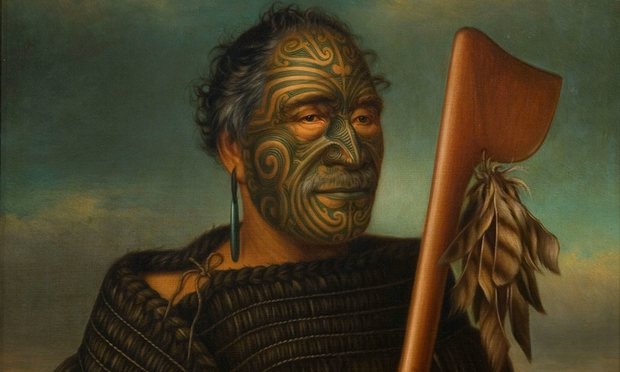 Gottfried Lindauer is best known for his Māori portraits, such as this 1890 oil on canvas called Tamati Waka Nene. Photograph via Auckland Art Gallery