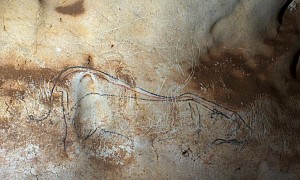 The lecture addresses one of the most well-established and influential ideas about prehistoric (and specifically Paleolithic) pictorial representation, namely, the idea that their original makers and beholders did not take them and use them as pictures ‘in our sense’ but instead considered them to be the ‘things themselves’, that is, the objects depicted, such as bison and other animals. But how do we reconcile this idea, which has some anthropological justification, with the visible activity of mark-making and of ‘painterliness’-of making visible the process of making the picture? What is the nature of this pictorial ‘illusion’? The lecture evaluates past and recent discussions of this matter using the example of the earliest widely accepted examples of prehistoric depiction, drawn from the Aurignacian tradition in southwestern Europe and specifically from the Cave of Chauvet.

Whitney Davis is Professor of History & Theory of Ancient & Modern Art, University of California at Berkeley, and Visiting Professor, University of York (UK). He is the author of seven books and nearly a hundred articles on aspects of prehistoric, ancient, and modern arts, the history and theory of art history and visual culture, and the history and theory of sexuality. His most recent book, A General Theory of Visual Culture, won the monograph prize of the American Society for Aesthetics in 2012.