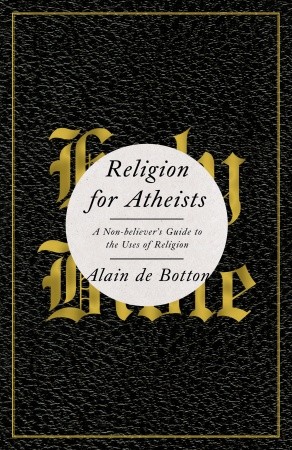 Alain de Botton’s new book is of interest because it directly addresses an issue important for atheistic art historians: if religion is bad, why was the art it produced so good? The usual answer is either (a) that religion is irrelevant to what really matters in such art—it embodies the individuals that created it, rather than the institutions that sponsored it— or (b) it is all a matter of history and so the question is beside the point. The first answer makes particular sense to those whose personal experience is that good things come about in spite of institutions, not because of them. De Botton takes the opposite tack: that it is a given that intellectual bases of religions are nonsense—myths left over from times of ignorance—but we should look at what is good about the institutional practices of religion, and then appropriate them for a secular society, in the same way that Christianity borrowed the pre-existing mid-winter feast for Christmas.

The downside of his position, or at least his book, is twofold. The first is that, like utopian philosophers always,  he is rather too inclined to recreate the world in his own image. Hence he argues against a historical organisation of art museums in favour of a thematic one, presenting an adapted exploded plan of Tate Modern with each floor reorganised as ‘Gallery of Suffering’, ‘Gallery of Compassion’, ‘Gallery of Fear’, ‘Gallery of Love’, ‘Gallery of Self-Knowledge’ and so forth. In other words, the organisation becomes an image of the pop philosopher’s preoccupations. For De Botton, this approach would restore the organisation in terms of moral and human issues of the churches from which the works in an art museum (though not Tate Modern!) originally came. But in doing this he tramples on an important consideration: the truth.

A concern with truth is what drives Dawkins and Hitchens, and if you pursue truth in art you end up with history. History—the concern with understanding how and why things were, and how our world came to be—is the best truth we have. Juxtapose two works of art historically, and you are dealing with a question of historical truth. As with science, any particular account may be wrong, but the right answer is worth pursuing. De Botton replaces this with dogma and authority. The scheme he imposes upon his gallery is not a human scheme, but a theological one. It is one designed to express a particular view of the world that stems, in this case, from one man; and which, in the world he describes, would stem from the authority of an institution. In practice the thematic, ahistorical gallery organisation, although it sounds attractive, is often more problematic that may at first appear.

To be sure, there is a distinction to be drawn between the temporary exhibition and the gallery itself, which cannot always be maintained too rigidly. Temporary exhibitions should have narratives (although too often they do not), and those narratives should be rooted in the opinions, beliefs, and desires of its author or authors. We as an audience know that: if Bellini is put beside Rothko—perhaps the room label speaks of ‘Love’ or ‘Compassion’—we know a point is being made, and that point is wrapped up in the views of the exhibition’s author. But we also know that this narrative is concerned only incidentally with truths about the works of Bellini or Rothko themselves; instead, the truth of the works of art themselves, which is inseparable from our art-historical knowledge of them, are being exploited to serve the ends of the exhibition’s author. Works of art can and should be used in this way (as indeed they were by the Church) and we can deal with it as we deal with any other expression of a point of view. But we, and De Botton, like to think of the organisation of the art museum itself as something bigger than this: as a macrocosm of the truth about our world. When push comes to shove, the only truths are scientific, and a gallery organisation that is not, at bottom, scientific, will be read (at least by me) as an effort by those in authority to impose on me their dogma. (That this is not an untopical issue is illustrated by the current dispute in Hungary, reported in the Art Newspaper, where the government is making over the museum system to promote its political message).

De Botton, in effect, wants us to create secular institutions modelled on those of religion but not based on the evident falsehoods on which all the big religions are based. He thinks this is a good idea, and he makes a case that frequently resonates. In the end, he believes that what society lacks today, and religious societies once had, is a concern with the place of the individual within a wider community. The advantages of the religious approach, he argues, is that it gives us a sense of perspective about our personal existence in relation to the realities of our life and in relation to our fellow humans.  He places great emphasis on the social rituals that religions can prescribe, but that individuals cannot. These rituals, he argues, are, in truth terms, arbitrary, but in psychological terms are valuable. Yet hanging over his book is the threat of a theocratic state organising our lives according to a scheme dreamt up by a De Botton: well-intentioned no doubt, but nonetheless authoritarian.

The test case of his interest in institutions is his account of universities. Like many a popular writer outside academe, he is critical of academe for not being sufficiently populist. He points out that religions are not concerned with the creation of knowledge, but with slicing up the knowledge we have into digestible pieces, whereas our universities present students with droning lectures that they cannot absorb. But he is here nibbling at the edges of a real problem. Universities, which follow a politico-scientific agenda, are preoccupied with research. For a long time the humanities survived within this framework out of inertia, and perhaps because of a lingering belief that the young should be educated, as opposed to being trained. But the gloves are off, and university managers (no longer academics in the old sense) are devoted to the agenda of their political masters: make money (or at least don’t cost the government any) and produce docile technocrats. Hence their active destruction of the humanities on spurious economic grounds: the humanities faculties are always hit hardest by budget cuts, although they are the cheapest to run. This paradox reveals that it is an ideological, not an economic, agenda that is at work. Seen from a manager’s perspective it is not paradoxical at all: because humanities faculties are the cheapest to run, any cuts here will be additionally effective in achieving the goal of replacing the old notion of education with the new.

The concept of ‘research’ is the key tool of the managers’ agenda, and humanities lecturers naively like to think that that is their priority as well, but the two concepts of ‘research’ are not the same. For the manager it is inseparable from external funding, whereas humanities lecturers think it is what their institutions are paying them to do. Humanities lecturers are not really interested in research in the managers’ sense. They are interested in thinking for themselves. But thinking does not take place wholly in isolation, and the main social support for such thinking has traditionally been communication with students. This is why the other powerful weapon in the manager’s armoury is the separation of teaching and research.

In this context, De Botton has a point. Humanities teaching is less about presenting new knowledge, than about restating old truths. Humanities lecturers often complain about not teaching their specialism, and there is no question that this is needed to train new humanities academics, but undergraduates need to know not the new stuff the lecturer is working on, but the old stuff about Michelangelo. More than that, they need to know Michelangelo: what we know about Michelangelo is but a means to this end. The student needs to know about him not as a scientist needs to know about Newton—in order to master the foundations of the discipline, and to understand how present-day physics was arrived at—but because Michelangelo is what matters. Michelangelo is the subject and object of the whole operation; the students need to know Michelangelo for no other purpose than that his work is something to live by.

And it is here that De Botton, while heading in the right direction, because of his philosophical preoccupation with big issues like Love and Death misses the point about art. All his art examples are merely illustrations of the moral or social issues that concern him. And here argument (a) above comes into play: what matters about an Ignudo by Michelangelo on the Sistine Ceiling is not what it tells us about Christianity, and neither is it what it tells us about those non-religious universal concepts like Tenderness or Pessimism that are central to De Botton’s world view. What matters is what it tells us about itself. To be sure, it can be connected with universal concepts in all sorts of ways, but what that Ignudo is is not that concept, even if it was the intention of the  artist to illustrate one (which in the case of a Sistine Ignudo was almost certainly not the case, which is what makes it a such good example). The point of it all is to see the world through Michelangelo’s eyes. To see in someone bending over at the beach the back of a Sistine Ignudo: that is what art is all about. (If that example seems to be unduly eroticised, another might be to see a landscape as a painting by Claude Lorrain. This may be problematic in a colonial culture, but however artificial that perception might be, we, in a particular place and time, are connected with a wider culture by viewing our world through Claude’s eyes.)

This is why art history matters. Art history is, or should be, the foundation of truths on which our experience of art is built. It helps us to avoid the kind of silly and uniformed questions the art historically illiterate tend to ask about a work of art before they can engage with it. Art History is to art what theology is to religion, except that theology is founded on falsehoods, while art history is predicated on a concept of historical truth. De Botton misses the point when he shows a photo of bored people in the National Gallery in London standing before a work receiving no guidance from art historical data in catalogue or label. That data enables us to understand the work historically, but does not help us to experience the work, and is not intended to do so. Sometimes it is better to know nothing about a work of art. As any first year art history lecturer knows, it is more effective for a student’s understanding of a work of art to get them to describe it than to read about it. But De Botton is right in supposing that the secular institution that most effectively picked up the slack from the religions—the university—no longer does so, and it is time to think about new institutions that might better meet our needs.

Alain de Botton, Religion for Atheists: A non-believer’s guide to the uses of religion