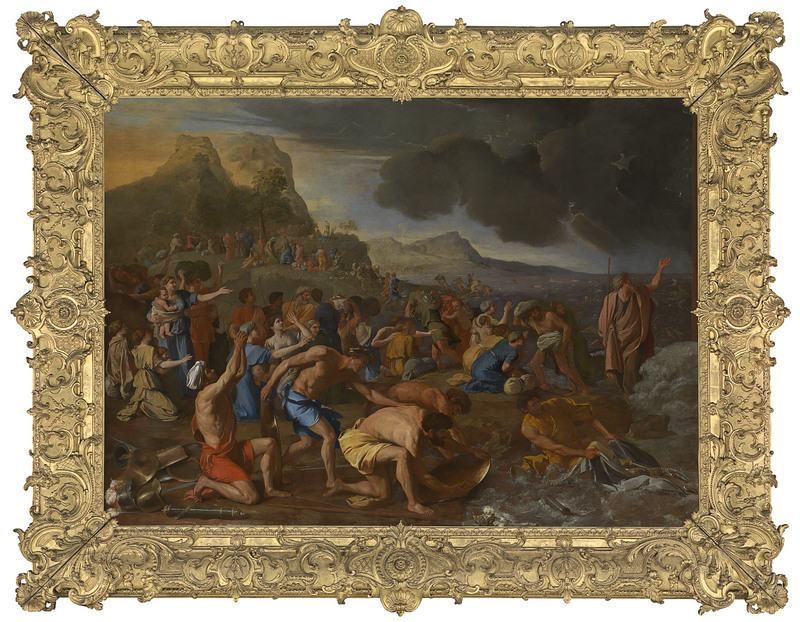 Today the National Gallery of Victoria unveiled Nicolas Poussin’s The Crossing of the Red Sea’ after an intensive, twelve-month conservation project. The painting is one of the NGV’s, and arguably Australia’s, finest European masterpieces. It was painted by Poussin in 1633-34 along with its companion piece The Adoration of the Golden Calf, which is housed in the National Gallery in London.

The restoration project was sponsored by BNP Paribas Australia & New Zealand, who have for the past eighteen years helped to restore over two hundred paintings, including works from the Chateau de Versailles, the Pompidou Centre in Paris, the Art Gallery of NSW, the Neue Pinakotheque in Munich and many other collections.

The painting was cleaned twice during the twentieth century, once in 1947 while still in a private collection, and again in 1960 by London-based restorer Horace Buttery, in connection with Anthony Blunt’s Poussin exhibition at the Louvre. Much of the repainted sky dates from this second restoration, when Buttery would have had little information to work with to restore the damaged areas apart from a tapestry copy and a print.  The extent of his work was revealed in ultraviolet photos of the painting taken at the beginning of the current conservation project. 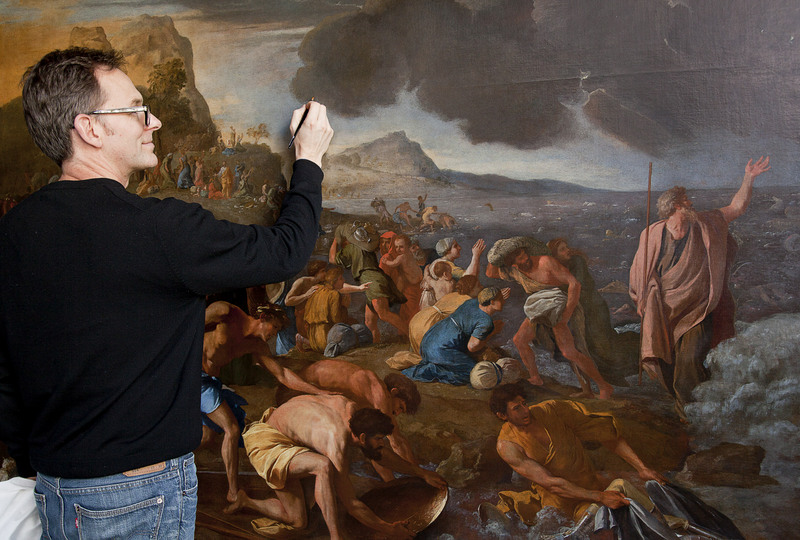 The restoration work on the painting was carried out by Carl Villis, the NGV’s Conservator of European Paintings before 1800. The first part of the conservation project involved stripping away layers of old varnish and dirt, which had darkened the composition and made certain passages almost illegible. For instance, Villis pointed out that the figures in the background seemed to float in mid-air, but after cleaning they were much more convincingly positioned on the distant escarpment. The ‘before’ photo also reminds us of the extent to which the rich colours, characteristic of Poussin’s style, had become quite obscured. Before restoration the eye was drawn to the brighter areas of red and blue but missed the delicate greens (as seen in the woman kneeling on the far left of the composition) or the bright mustard yellows, which tended to blend in with the overall yellowed tone of the painting. Now we are able to clearly see the way that Poussin used repeated colours in the drapery on the figures to guide our eye through the composition and through the story of the crossing of the red sea itself. 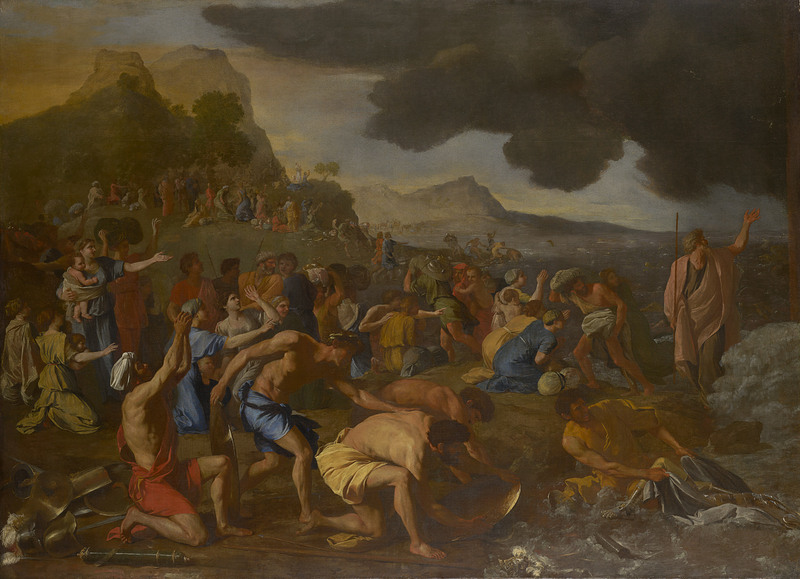 Villis said that the project had presented a number of challenges, not least a considerable loss of paint from the upper half of the painting, the result of past cleanings. Apparently in the area where we can see storm clouds gathering in the top right-hand section, the paint layer had worn away not only to the ground but down to the canvas itself. This type of damage can be seen in other areas of the painting in photos published on Carl Villis’s blog that tracked the conservation project. To assist with the restoration of these damaged areas, Villis studied a wide range of Poussin’s works from the 1630s in America and Europe. The restoration of these damaged areas was helped considerably by the re-discovery of an exact replica of the painting. The existence of a copy, possibly painted by the French seventeenth-century painter Charles Le Brun, was known but thought to be lost. In 2009, it resurfaced at the Iris and B. Gerald Cantor Center for Visual Arts, Stanford University. This very exact replica, although slightly discoloured with yellow varnish, is in much better condition than the original. Villis examined the copy and had a number of high quality photographs made, which allowed him to restore several lost areas, in particular the clouds, with the knowledge that he was remaining faithful to Poussin’s original composition. The copy also assisted in the restoration of some losses in the bottom right of that painting, where the waves of the Red Sea are breaking around the feet of the Israelites, which was very thinly painted, in a manner characteristic of Poussin.

Although many damaged areas have been restored and the painting now reads much more clearly, Villis acknowledged that it was necessary to be judicious about what one puts back and what one does not, and that restorers need to acknowledge the history of the painting and accept that an old master paintings will never look exactly as it did when the paint had just dried. Villis confessed that he felt it was hard as a restorer to be entirely satisfied at the end of the process because, given the age of the painting, some areas can never be returned to their original condition. However, to the viewer who has not spent the last twelve months looking in minute detail at this work, the transformation is striking and Carl Villis deserves much credit for carrying out a sensitive restoration, which will allow the painting to speak more directly to art historians and the general public alike.

The beautiful eighteenth-century frame was also restored by NGV Conservator of Frames and Furniture, MaryJo Lelyveld.  The restoration of the frame included reinstating small losses to the decorative carvings. The frame was commissioned specifically for the painting in c.1710, when the then owner, Jean-Baptiste le Ragois de Bretonvilliers, redecorated his Parisian apartments in the Regency style. The pendant Adoration of the Golden Calf in London has a matching frame.

The painting is now on public view in the NGV International on St Kilda Rd and I would encourage everyone to wander down and to look in detail at this magnificent work.

N.B. For anyone interested in more detail on the painting and the conservation project the NGV has produced a short, richly illustrated book now available in the NGV bookshop. Also the blog that Carl Villis used to track the project is still available to read on the NGV website. Also see Mark Shepheard’s ‘What are you looking at?’ on the NGV Poussin.

← Lecture | From Titian to Tartan – The National Galleries of Scotland, Michael Clarke
What are you looking at? | Mark Shepheard – Nicolas Poussin, The Crossing of the Red Sea →