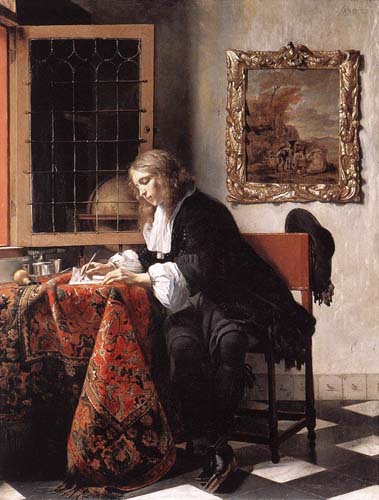 Difficult as this is to believe for a painter of his significance, this is only the second comprehensive exhibition of Gabriel Metsu’s work, the last having occurred in 1966. Although confined to just two rooms in the East Building of the National Gallery of Art in Washington and exhibiting almost forty of the painter’s panels, this show nonetheless makes a significant contribution to the study of Metsu, a painter whose works are confined largely to two decades (the 1650s and 1660s) and number scarcely over 130.

The first room of the exhibition is largely, though not wholly, dedicated to the genre works of the 1650s and the second to domestic interiors popularised by Vermeer that occupied Metsu increasingly in the 1660s before the painter’s untimely death at the age of 37.  Although there is no attempt to link the paintings thematically or to provide overt means of reading them within the exhibition itself, the lineaments of Metsu’s career are reasonably obvious. During the 1650s and early 1660s, he is absorbed by market place scenes inspired by his own residence in the thriving metropolis of Amsterdam (A woman selling herrings, c. 1656-8; and The vegetable market in Amsterdam, c. 1657-61) (Fig. 1) as well as producing examinations of domestic life and tavern scenes, sometimes influenced by Rembrandt’s vision and his trenchant humour (Old man holding a pipe and jug, c. 1661-3; An old woman with a book on her lap, c. 1661-3).  This formative period sees the painter often engaged in the exploration of tonal control, including several almost monochromatic paintings (A cavalier visiting a blacksmith’s shop, c. 1654-6). Also represented from this period are images reflecting Metsu’s aspirations to be a history painter in his hometown of Leiden. These paintings, including The artist as the Prodigal Son (1661 – one of very few securely dated paintings) and The dismissal of Hagar (c. 1653-4) offer precious insight into what is now a very poorly documented section of the painter’s career, and chart the influence of a range of other artists, including Weenix, on the young Metsu.

Firmly settled in Amsterdam by 1660, Metsu increasingly turned his attention to the production of works in the fijnschilder style of Gerard Ter Borch and Gerrit Dou, a decision that may have cost the volume of his output dearly. Paintings in this style dominate the second room of the exhibition, and it is in these that we see Metsu achieve full mastery. The iridescent silks of A man visiting a woman washing her hands (c. 1662-4) (Fig. 2) or A woman composing music, with an inquisitive man (c. 1664-7) (Fig. 3) and soft furs of A woman tuning her cittern, approached by a man (c. 1659-62) (Fig. 4) recall Ter Borch and Mieris, while the massing of blocks of sometimes matte colour and the selection of thematic material in The sick child (c. 1664-6) (Fig. 5), and A man writing a letter (Fig. 6) and A woman reading a letter (both c. 1664-6) (Fig. 7) immediately bring the vexed issue of the interconnection of Vermeer and Metsu into focus.  Still life with a dead cockrel (c. 1655-8) (Fig. 8), in the first room of the exhibition, urges us to reconsider Metsu as a still-life painter of the 1660s in the tradition of masters such as Pieter Claesz.

The highlight of the show is clearly the severe and almost brutally intense Christ on the cross (1664, almost the latest work offered), which shows how, by monumentalising and desensualising Rubens’ manner, Metsu could produce a worthy Counterreformation successor to the Flemish tradition that produced Rogier van der Weyden.

The exhibition catalogue, mandatory reading given the scarcity of information within the exhibition space itself, will make an important contribution to Metsu scholarship. Curator Adriaan Waiboer’s opening essay, drawing on doctoral research into the painter, establishes the framework of Metsu’s life and activities, as well as beginning to lay out the several influences on his paintings; the subject of the connection between Vermeer and Metsu and their reception through the centuries forms the core of Waiboer’s other contribution to the volume. Metsu and commerce consume four essays – Wayne Franits on Metsu’s incorporation of luxurious items into his paintings; Linda Stone-Ferrier on the market scenes; Pieter Roelofs on early trade in Metsu’s paintings; and Bianca du Mortier on the representation of costume in Metsu’s work. E. Melanie Gifford, in an important contribution to the Vermeer/Metsu debate, writes in searching detail on what an examination of Metsu’s technique can offer this argument. Marijn Schapelhouman’s essay on the tiny graphic output of the artist closes the catalogue.

The lack of a fully itemised catalogue, with discussions of each painting, is, however, a serious oversight. Several works deserved more extended treatment than a cursory mention in one or other of the catalogue essays. A discussion of the extremely odd subject of A woman composing music, with an inquisitive man should have provided a context for the subject of music in Metsu’s paintings (not otherwise treated) and the monumentality of Christ on the cross, which seems utterly unmotivated by the rest of the work on show, might have be contextualised better in an individual work entry.

[NB Click on the thumbnails to view larger versions. If you are reading this in an email you will need to follow the link to the MAN website to view the show properly]

← Art History Seminar Program at the University of Melbourne
Symposium: Print Matters at the Baillieu →