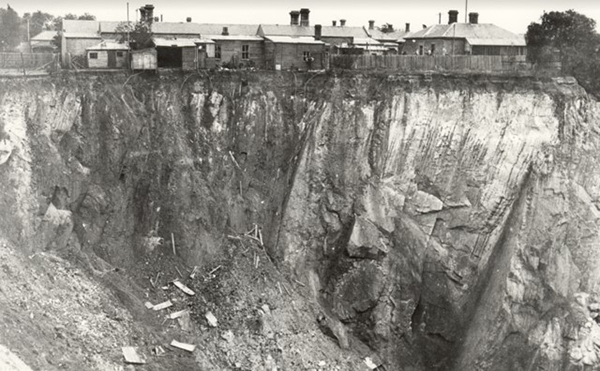 Converging in time continues OSW’s sculptural investigation into the forces of material formation. Drawing on earth sciences research and studies of the Anthropocene, this new exhibition explores the relationship between the mineral make-up of a site and the societies they produce and sustain. This approach is particularly relevant in the context of Australia, where an ‘extractivist’ logic bears a powerful influence on politics, the economy and land.

OSW’s exhibition brings together new sculptural, video and sound works in assemblages with extended support structures that incorporate items from Museums Victoria’s Geosciences collection. These include specimens such as a meteorite fragment containing pre-solar grains, Saléeite crystals from the Ranger Uranium Mine in the Northern Territory, a 23-million-year-old kauri log and a fossilised ‘sea lily’ unearthed in a Brunswick clay pit in 1923.

Charlotte Day, MUMA Director: ‘Together as Open Spatial Workshop, and each with their own distinct practices, Bird, Hester and Mitchell have been able to create a significant creative entity and platform on which to test their ideas, challenge their working methods and open their joint practice to a range of contexts and other disciplines. MUMA’s galleries will become an extension of OSW’s studio, with a number of elements formed in situ, and others imbedded in the Museum’s architecture.

In addition to sharing their engagement with the natural sciences collection at Museums Victoria, OSW’s new project and exhibition at MUMA builds on their recent projects in La Trobe Valley, their realisation of an anthropocite rock for Monash’s geological garden, and their thinking about time itself – grappling with the immensity of time as well as the social and economic impact of human activity.’

MUMA will publish the first monograph on OSW, which will include three newly-commissioned essays by Matt Poll, Curator of Indigenous Heritage and Repatriation Project at Macleay Museum at the University of Sydney; Dr Saskia Beudel, previously Carson Fellow, Rachel Carson Center for Environment and Society at the Ludwig-Maximilians-Universität, Munich; and Dr Kathryn Yusoff, Senior Lecturer in Human Geography at Queen Mary University in London; and selected texts authored by Open Spatial Workshop. As well, the publication will include in situ exhibition documentation and numerous reference images that have been instrumental to Open Spatial Workshop’s research over the last decade.

This project has been assisted by the Australian Government through the Australia Council for the Arts, its arts funding and advisory body. With special thanks to Dermot Henry, Acting Head of Sciences and Museums Victoria for their involvement and support of OSW’s new work. Bianca Hester is a Sidney Myer Creative Fellow 2017-2018.