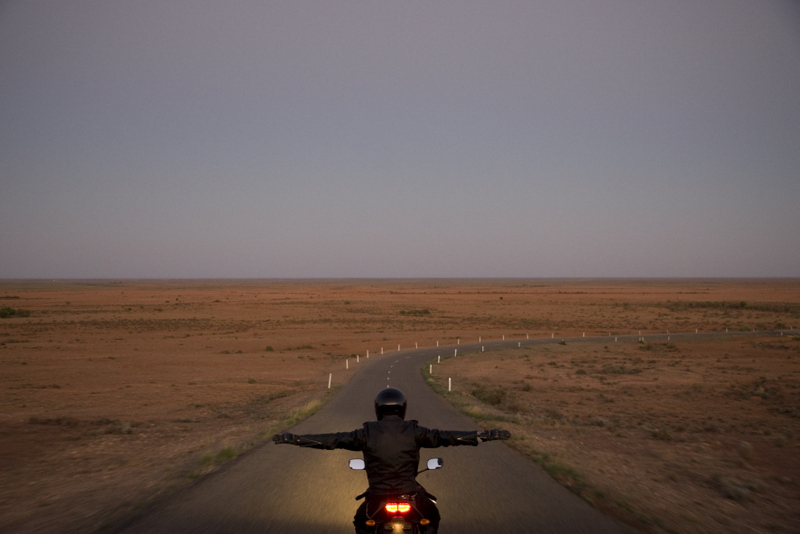 The exhibition is on at the Royal Academy of the Arts from 21 September–8 December 2013.

Entering the grand Georgian courtyard of Burlington House, flanked by the Society of Antiquaries, the Linnaean Society and the Society of Geographers, a large banner with Sidney Nolan’s iconic 1946 Ned Kelly greets the visitor at the steps of the Royal Academy. It is a foretaste of things to come; Kelly is seen from the back riding off into a sandy, sparse scrub, shotgun in hand, a lone outlaw in black iron armor. Inside the Royal Academy Shaun Gladwell’s video Approach to Mundi Mundi (1997) is projected onto black walls (Fig. 1). A black leather-clad motor cyclist, a dawn rider with arms out-stretched reminiscent of Anthony Gormley’s Angel of the North, rides along double white lines on an outback bitumen road, his back also to us. Analogies abound; both Nolan’s Kelly and Gladwell’s rider lead us into a vast, uninhabited terrain that holds the power to terrify. These solitary interlopers establish a fundamental perception of Australia as one in which distance is both a tyranny and an aesthetic attribute.

But it is not quite as simple as that.  This exhibition, the first large scale survey of Australian art in Britain for fifty years unfolding through thirteen rooms, is a major opportunity for the National Gallery of Australia—the Royal Academy’s collaborator—to present a revision of Australia’s ‘uncharted realms’. In the first room, devoted to contemporary Indigenous painting, this is brilliantly achieved. Both collectively and individually these works possess a high aesthetic voltage and transport you into ‘ancestral lands and the dreaming’, so that the fear of the landscape of Ned Kelly or the dawn rider is quickly dispelled. One British critic, possibly suffering atavistic guilt or simply resistant to anything abstract and alien, suggested that these were ‘the stale rejiggings of a half-remembered heritage wrecked by alcohol, religion and servitude’.[1] Yet for this visitorthese Indigenous paintings thrill; they carry an exciting language at once traditional and modern, mythical, cartographic and sensual in their rhythmic, earthy tones. The reductive linearism of Queenie McKenzie and Turkey Tolson Tjupurrula, the dotted constellations of Clifford Possum Tjapaltjarri, the powerful spatiality of Rover Thomas and the abstract vivacity of Sally Gabori are without peer (Fig. 2).  Doreen Reid Nakamarra’s Untitled, 2007, which lies elevated but flat in the centre of the gallery for us to look down upon its herringbone patterning, emulates central Australia’s ancient geological formations. In their catalogue essay Wally Caruana and Francesca Cubillio state that the early settlers may not have appreciated ‘the intrinsic relationship between Indigenous people and their land that was and continues to be at the core of Aboriginal being: and at the core of Aboriginal art,’ but this exhibition demonstrates that these works are a significant correlative to any of the European representations of Arcadian, pastoral or open desert country.

If Nolan’s Ned Kelly purports to present our modern mythologised identity, then much of the non-indigenous parts of the exhibition are an uneven prelude. There are many major works that mark cultural engagement between the early settlers, indigenous tribes and the mediating landscape, but,  in what aspires to be an historical survey of European settlement and a ‘definitive survey’ of Australian art, omissions, tend to jump to mind. As Donald Horne once wrote ‘nations don’t exist in nature, but by social assertion’, and one of the exhibition’s faults is precisely the lack of a pictorial narrative that addresses this ‘social assertion’, in particular paintings by non-Indigenous artists.[2] We do find this later in the works by Gordon Bennett, Possession Island, 1991, and Tracy Moffat’s Up in the Sky, 1997. Admittedly, such an extensive survey as this presents difficulties of coherence, and while the catalogue essays attempt to address these issues, it is probably impossible today to curate a convincing picture of Australian art in all its historical derivations and developments, wrought by provincialism, distance and its struggle into a modern nation; than it was in 1963 when the Tate Gallery presented Australian Painting: Colonialism, Impressionism and Contemporary. Even the four page chronology in the catalogue omits some definitive achievements; for example, neither Bernard Smith’s ground breaking European Vision and the South Pacific (1960) nor the landmark 1992 Mabo act are mentioned.

In the section on colonial settlement, the act of cultivating the land as well as the emergence of a national identity are demonstrated in some fine examples, including depictions of settler and aboriginal co-habitation, but where are major paintings by Robert Dowling and Benjamin Duterrau, or the first sculptural busts (the casts of the Tasmanian aboriginal Truganini and her husband Woureddy made by Benjamin Law in 1835-36)? Topographical works and small works on paper in the early colonial section show the advancement of town planning and the exploration of the continent. Particularly good are William Westall’s Chasm Island, Native Cave Painting (1803) and View in Sir E. Pellew’s Group, Gulph of Carpentaria: Discovered by Captain Flinders 1802 (c. 1812). But then there are several dull works of secondary standard, and the inclusion of an emu egg silver inkwell and a silver candelabrum adorned with native flora, fauna and an aborigine, draw attention to the overall lack of other decorative arts, such as ceramics or textiles with emblematic designs.

The exhibition would also have been strengthened by the deletion of some works by the more over-represented artists and a number of weak paintings. There are too many works by too few: four large works by John Glover, six by Eugene von Guérard, five by Arthur Streeton, seven by Tom Roberts, and four by Frederick McCubbin, including his sentimental triptych The Pioneer (1904), and two lesser works, Violet and Gold (1911) and Collins Street (c. 1915), the last supposedly painted from the back of a car. Other poor examples include a lumpy Ethel Carrick, mediocre works by Elioth Gruner and Roy De Maistre and an unforgivably bland Kenneth McQueen. A large Blamire Young watercolour, Dry Weather, c. 1912, however, is refreshingly luminous.

In the section devoted to Modernism, 1920-1950, Noel Counihan’s series of paintings of urban aborigines or his Miners series, a Hilda Rix Nicholas’s painting of rural New South Wales, or a Wolfgang Sievers’ photograph of an industrialised landscape would have all been useful additions. When it comes to Australia’s high Modernism we are again reminded of our expatriate success story: Sir Sidney Nolan, R.A. It was perhaps inevitable that ‘our Sid’ and his archetypal ‘outsider heroes’, the Kelly gang would feature prominently and be used to promote the exhibition, given his high profile in Britain. But his five paintings – extending along one long wall – come at the expense of other Australian artists of that period, such as Counihan, Godfrey Miller, Jon Molvig or John Perceval, whose works would have injected some grit, cubist geometry and even gaiety into the room. That said, Nolan’s Inland Australia is a powerful painting from the artist, who, as Robert Hughes succinctly wrote, ‘rescued Australian landscape, at one stroke, from the blue and gold limbo into which it had fallen’[3]. Nearby, Arthur Boyd’s monumental painting from his Caged Painter series is impressively commanding in its savage guilt and cruelty (Fig. 3).

It has been said that ‘to understand Australia one must look elsewhere’ and in the 1960s the young art critic Robert Hughes, to whom the catalogue is dedicated, did just that, leaving Australia and moving to Italy[4]. A little earlier he had interpreted modern Australian art as a product of its isolation from the great European tradition, rather than recognising it as something formed by social and cultural inheritances as well as climate and geography. The history of Australian art until the post-war period has been an act of looking elsewhere. Edwardians and Modernists studied overseas because of a restrictive, internal cultural hegemony, usually controlled by reactionary artists and state gallery directors or trustees, and a lack of European masterpieces, whether traditional or modernist, while indigenous art was locked in wealthy collectors’ cupboards or shoved away in museum basements and often considered to be of anthropological rather than artistic interest. But since the Second World War Australian artists have been able to develop their distinctive otherness with greater legitimacy, and in more recent decades, so too have indigenous artists. This is evident in Fiona Foley’s video Bliss (2006), which unearths the tragic consequences of the nineteenth-century exploitation of Aboriginal workers who were ‘paid not in cash but in opium dregs’.

A novel periodising term introduces another section, ‘Elizabethan Post-Colonial 1950–2013’ (strictly speaking it should be ‘Second Elizabethan’, as Winston Churchill coined in 1952). Yet the 1950s was a time when Australians began to recognize that the British were no longer their sole arbiters of taste and values, and Australian artists and intellectuals were working hard at determining their post-colonial cultural image. Around the same time a few Aboriginal artists, including children, were given paper, brushes and watercolours, while Albert Namatjira rose to fame by imitating the Heysenesque western style of landscape painting. Another two decades would pass before Indigenous ancestral myths and spiritual landscapes would be transferred to canvas for the modern market.  A second, smaller room contains older examples of bark paintings, the earliest dated to c. 1884, while a larger third room presents a selection of post-war indigenous paintings, interspersed with contemporaneous paintings by Brian Blanchflower, Tony Tuckson and a magnificent Ian Fairweather (Fig. 4). But again, a late landscape with figures by Juan Davila, a John Wolseley, a Martin King, a vigorous Jan Senbergs and a Janet Lawrence would have contributed a dynamic connectivity with the landscape.

The last two rooms show contemporary art and the sense of melancholy in Barron Field’s sentiments that (as Thomas Keneally points out in the catalogue) summed up many early settlers’ attitudes to the Australian landscape and bush is continued in the works selected for this last section. We are confronted with Cathy Temin’s Tombstone Garden (2012) (the first sculpture of the exhibition) three squat, white furry pillars that allude to an idealised landscape of memory and loss. Seen in association with several low key colour paintings, photographs or black and white prints, such as Rosemary Lang’s Jim, which parodies the ancient notion of an Antipodean upside-down world, or Imants Tiller’s Shadow of the Hereafter (2007), and John Beard’s ghostly Uluru 8 (2002), the effect is an anticlimactic finale. This is a pity, when a more dynamic installation or sculpture, perhaps one by Lauren Berkowitz or Janet Lawrence would have enlivened the pallid tone of this room.

As Daniel Thomas writes in the catalogue, ‘Australian geography might be the prime source of Australianess, but … potent words as well as cultural evolution of Church, state and law will always reserve a British element in Australian art’.[5] This exhibition demonstrates that embedded in its art there is also the immutable Indigenous spirit of country that continues to nurture encounters of another kind.

← EVCS | Felicity Harley-McGowan ‘Being Blunt: The art history ‘revolution’ in 1940s London′
Collection Changeovers: From the Vaults at the NGV →