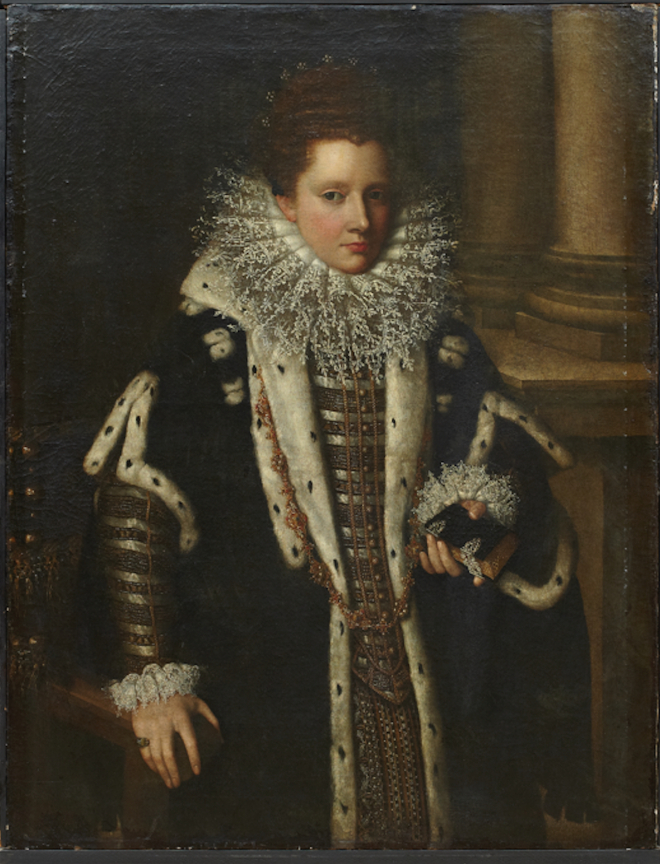 The rediscovery of a portrait by Lavinia Fontana (1552-1614) was announced this week. As announced on the Villa Ludovisi website the subject shows “Costanza Sforza of Santa Fiore (1560-1617), wife of the Duke of Sora, Giacomo Boncompagni (1548-1612). Giacomo himself was the legitimated son of Ugo Boncompagni = Pope Gregory XIII (1505-1572-1585). So at the time of her marriage in 1576—at the Apostolic Palace in the Vatican, with the whole College of Cardinals in attendance—Costanza Sforza found herself in the unusual position of daughter-in-law to a reigning Pope.”

Plans for a Ballarat Biennale of Australian Art that would ‘draw in $10 million to Ballarat’s economy from an anticipated 100,000 visitors‘ were flagged last week. The proposal is headed by Julie Collins, previously curator of Lorne Sculpture Biennale, she has proposed that the ‘Biennale will be held over six weeks in September and October 2018 throughout more than 50 indoor and outdoor locations across Ballarat, showcasing the work of more than 150 Australian artists.’

Italy has announced another global search for new museum directors. Following the installation of 20 new directors of Italian Institutions last year, several of which were, for the first time, not Italian (such as Erik Schmidt who is the new director of the Uffizi Gallery). The Italian government is searching for new managers for nine cultural sites, including the Emperor Hadrian’s Villa in Tivoli, Ostia Antica, which was ancient Rome’s principal trading port, and Villa Giulia, a museum of Etruscan art and artefacts in the capital. More in the Telegraph.

Staying in Italy, there is an exciting announcement that the Uffizi plans to digitise and make available online, its collection of antique sculpture. The Uffizi, and Italian museums generally, have not been strong at providing open access to their collections so this is a welcome step in the right direction from one the leading museums. Is it partly due to the new director?

New directors have been announced for the Wallace Collection in London and the Rijksmuseum in Amsterdam. The current Director of Collections at the Rijksmuseum Taco Dibbits will become their new director. Xavier Bray will take over as the new director at the Wallace Collection. Bray is currently chief curator at Dulwich Picture gallery and was the guest-curator of the successful Goya and his Portraits exhibition at the National Gallery of London last year.

An interesting story in the New York Times on art storage in free ports – are they the greatest art collection that no one ever sees? “Many masterpieces have long lived outside of public view, buried in the basements of museums or tucked away in the private villas of the rich. But the free ports are drawing more criticism and concern, namely: Are they bad for art? Does the boxing up of millions of valuable works pervert the very essence of what art is supposed to do? Yes, say many in the art world. “Works of art are created to be viewed,” said the director of the Louvre, Jean-Luc Martinez, who described free ports as the greatest museums no one can see.Some see even higher stakes for contemporary works, as they can be whisked off, their paint hardly dry, before ever entering the public’s consciousness. Storage puts the art “intellectually almost in a coma,” said Joanne Heyler, the director of the Broad Museum.

A reflection on Virtual Reality and Museums in which Adrian Hon states that Virtual Reality will break museums. Despite the hyperbole the article raises some interesting issues about how VR could work with galleries.Not only does he see it as a solution to overcrowding (which I am sceptical of – people are drawn in large groups to the ‘event’ of an exhibition, which can’t be replicated online), but he also suggests that VR could do a better job of providing context for art objects, something he observes that many museums don’t do all that well. A thoughtful piece despite the brash headline.

And finally, to finish with an example of a gallery doing a good job to provide detailed and thoughtful context, on the topic of whether Giorgione or Titian painted the ‘Giustiniani Portrait/Portrait of a Young Man in the Gemäldegalerie collection. The ‘cast your vote’ is a bit cheesy but I like that the gallery is including thoughtful, well written art history by leading experts as part of its outreach for this exhibition.