This weekend is the final weekend of the NGV’s Masterpieces from the Hermitage: The Legacy of Catherine the Great. There are talks, drawing and music events over the weekend (see more here http://www.ngv.vic.gov.au/whats-on/programs-events/). I gave a talk at the first Friday Late event on Marie-Anne Collot’s bust of Diderot and thought I would share some of my thoughts on this portrait as a final farewell to the exhibition. 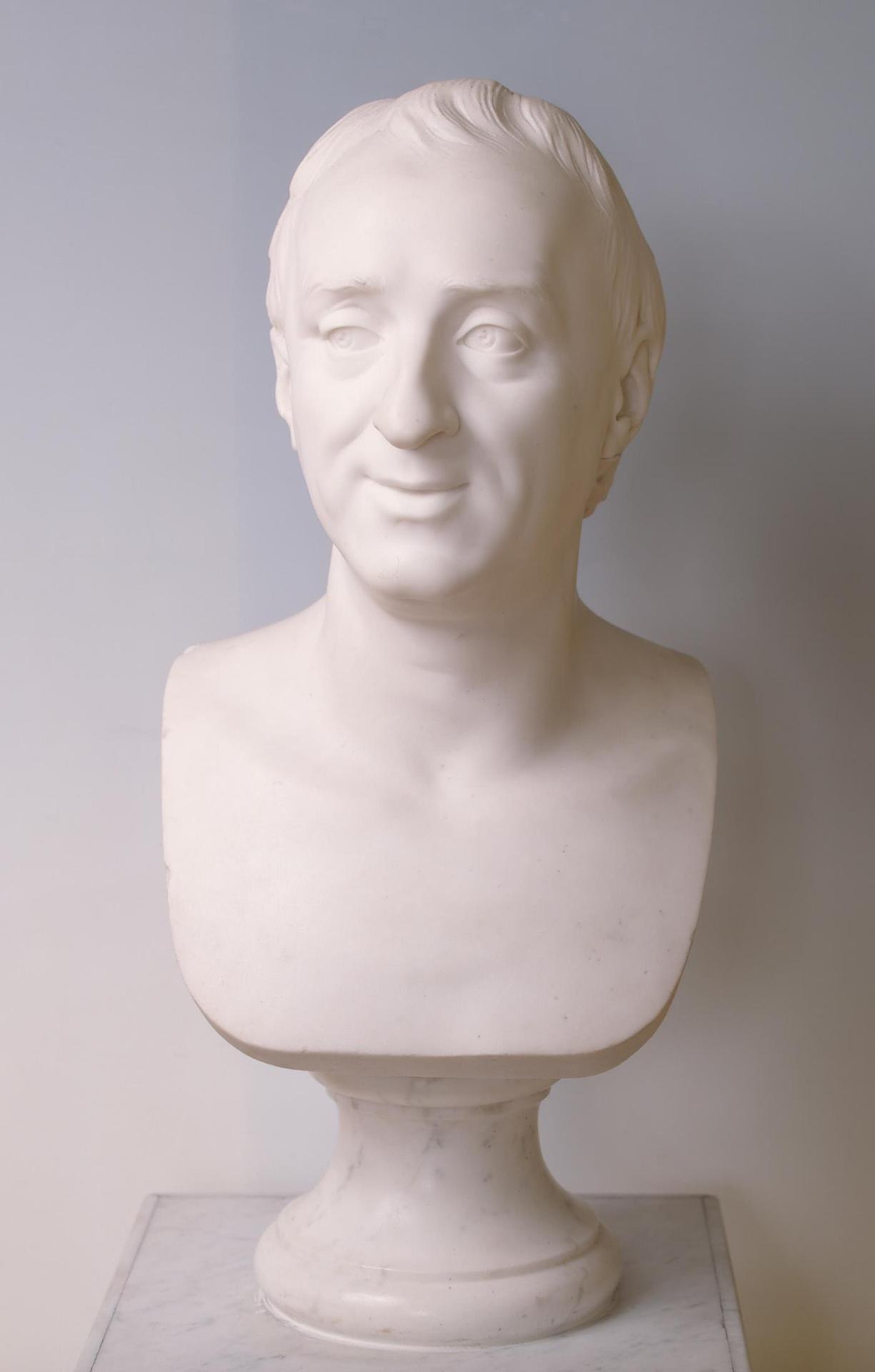 In the current exhibition at the NGV of ‘Treasures from the Hermitage’ we enter the exhibition face-to-face with Catherine the Great’s formal royal portrait by Alexander Roslin, a portrait that embodies her position as an autocratic ruler. She is flanked by marble busts of two of France’s leading Enlightenment thinkers, Voltaire and Diderot. Both men enjoyed a type of friendship with Catherine, writing letters and sharing ideas. Catherine was well-travelled, well-educated, spoke many languages and was genuinely interested in the new philosophies put forward by Voltaire and Diderot. At the same time their friendship embodied some of the ambiguities of Catherine’s position – she had the power and the wealth to draw to her court leading artists, philosophers and writers, but at the same time she could not and would not embrace all of their ideas. She wrote to Diderot

“Monsieur Diderot, I have listened with the greatest pleasure to the inspirations of your brilliant mind; but all your grand principles, which I understand very well, would do splendidly in books and very badly in practice. In all your plans for reform, you are forgetting the difference between our two positions: you work only on paper, which accepts anything, is smooth and flexible and offers not obstacle either to your imagination or to your pen, while I, poor Empress, work on human skin, which is far more sensitive and touchy.

These busts, by the French sculptor Marie-Anne Collot (1748-1821), made only two years apart from one another, represent both Catherine’s interest in contemporary artists of the period (especially French ones) and her engagement with new ideas about politics, identity, the rights of subjects and the responsibilities of a ruler (amongst other things). Collot entered the Paris studio of the sculptor Etienne Falconet (best known for his grand equestrian sculpture of Peter the Great) in 1763 when she was just fifteen. She subsequently travelled with him to the Catherine’s court in 1766 and remained there until 1778. She became the most sought-after society portrait sculptor in St Petersburg and was appointed official portrait sculptor to Catherine.

Collot’s first portrait of Diderot was made in 1766 before she went to Russia, this portrait (now lost) was made in terracotta and was much praised by Diderot himself. He wrote that ‘among the good portraits of me is the bust by Mademoiselle Collot which belongs to my friend Monsieur Grimm. It is good, very good; in his home it has take the place of another by her master Falconet, which was not good. When Falconet saw his student’s bust he took his hammer and smashed his own in her presence. That was frank and courageous.’ It seems likely that the marble bust in the exhibition was based upon this terracotta bust. Collot’s portrait bust shows Diderot without a wig (unlike that of Voltaire) so that his hair is exposed and slightly tousled, reminiscent of a famous portrait of him by Louis Michel Van Loo. Collot’s portrait shows Diderot with a slight smile, he looks relaxed and friendly, not distant or stony faced. There is also a sincerity and a clear individuality in the portrait – traits that were important at the time. Visitors to the Paris Salon frequently used words like ‘truth’ and ‘resemblance’ when discussing portraits. The medium of sculpture lent itself well to a representation of these ideals – the three dimensionality of the bust gives Diderot a real presence in our space, his mouth slightly open as though he is about to speak or to laugh. It reminds us of a comment Diderot himself wrote of a bust of a friend “He lives, he thinks, he looks, he hears, he is about to speak.” In this portrait Collot presents a sort of living Diderot, standing beside the bust it seems it is as though he has joined our social gathering and is about to regale us with a story.  One reason, perhaps, that Collot creates this sense of intimacy and relaxed sociabiliuty is because she, and her teacher Falconet, were both close friends of Diderot. He wrote to Falconet two years after the pair had left France that ‘I love you with all my heart and I have not stopped being close to you.’ He recalled Collot and said that he loved her ‘like his own child’ and asked ‘won’t we ever see each other again’. In this light we can see Collot’s bust as both a portrait of a great philosopher who was an intimate correspondent of Catherine the Great (Collot executed a portrait bust of Catherine in very much the same style several years later) and as a portrait that represents Collot’s affection for a close friend that she hadn’t seen for almost six years.

For further reading I reccommend: