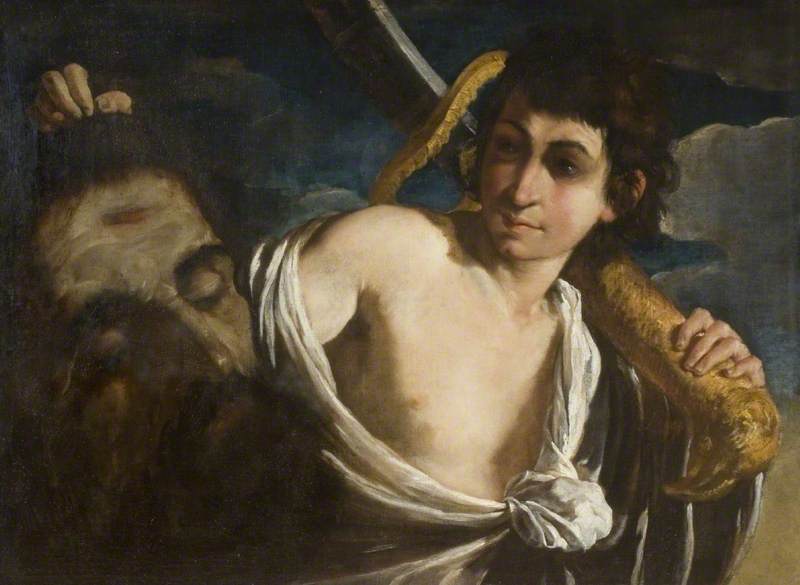 The future King of Israel, David, is contemplating the head of the slain Goliath, champion of the Philistines. As the book of Samuel recounts, David hurls a stone from his sling, which hits Goliath in the centre of his forehead and fells him; David subsequently cuts off his head which results in the flight of the Philistines.

In Caletti’s painting, David seems to focus on the wound made by his slingshot; it is a congealed ochre smear, the aftermath of violence, reminiscent of the great red spot of Jupiter, or a bloodshot cyclopean eye. Now the giant’s real eyes are closed forever, but this mark seems to fascinate David as he seems to think back to the time of the battle. The impact must have been tremendous and Goliath’s forehead has taken most of it; that part of his head resembles the rubbery skin of a mask rather than solid skin and bone. On the journey from forehead to mouth, colour loses to bluish-black shadows which extend downwards to the lower frame of the picture. Then there’s a transition from shadow to light, the latter present in the creamy white of David’s shirt, which over-familiarly brushes up against the dead giant’s beard. The metallic quality of the impasto white shirt encircles David’s milky white body, which is hardly defined as it isn’t pitted by muscle or bone. The sternum is just hinted at rather than drawn boldly, but the collarbone is more conspicuous, which might be due to an underlayer, or even the ground peeping through. Rather than demonstrate anatomical knowledge, the painter indulges his love of light and shadow, which plays out across the white field of the torso. Two lines of shadow cut down in two diagonals which accentuate the boy’s torso, giving it the shape of a funnel or cone. Another deep shadow seems to flow over the boy’s shoulder only to be abruptly stopped by the bluish-grey passage of collar bone.

David is scarce-bearded, has rosy cheeks and black beetling eyebrows. His hair is long and unkempt, and perhaps the painter especially delighted in that motif of the locks flowing over the ear. Over his head at a sharp angle, David holds his sword, the instrument of Goliath’s final destruction. The painter has used different colours here: possibly lead tin yellow, or Naples yellow because the colour is more muted. The scabbard ends in the shape of a bird’s beak, which isn’t unusual in weaponry of this time. Just the fingers of the warrior’s left hand are seen, grasping for purchase on the pommel of the sword. On the other side of the picture, almost at top left, four fingers and thumb creep into view. This head of the colossus is larger than usual; it is thrust outwards towards non-pictorial space – a sort of offering to the spectator. The backdrop of blue sky and grey-white clouds is the least successful passage of the painting. Summarily painted, maybe even just a painted backdrop in the artist’s studio, the elements fail to convince. If the painter sought to imbue his sky with some brooding significance, he failed to achieve it.

If we were to imagine a spectator for this painting, who might we envisage? Did the artist visualize a specific baroque patron fascinated by the violence of this subject? Possibly, but all baroque treatments of this subject imply violence – and we might therefore imagine a gathering of different spectators in a gallery of paintings of the same subject. Is there any distinguishing feature that might serve to make Calletti’s stand out in such a hypothetical exhibition? We could try comparing Caletti’s version with one by a painter who was traditionally thought to have painted the Birmingham picture, according to the curatorial record. If we look at Guercino’s David and Goliath we find an essay in baroque expression: David’s head turns up towards the heavens, as if to beg forgiveness after his violent deed. Guercino’s version seems more about repentance, closer to a penitent Magdalene. His presentation of Goliath is different too, since Guercino has the giant’s head on its side, where it functions more as a prop than a real presence, which the head does in the Caletti picture. As for Caletti’s David, he belongs to another pictorial world; his expression isn’t emotive, but slightly contemplative. We might expect contemplation in baroque versions of this subject as that’s the usual formula: meditation after action. Yet Caletti’s David seems difficult to read: marginally quizzical; not exactly triumphant; and not absolutely thoughtful – a range of expressions playing across that enigmatic face. We might read regret in the conqueror’s face, but this David comes across as more self-assured, even arrogant.

We could try to divine David’s motives by the thought experiment of projecting ourselves into the painting; we could “stand” behind David, so that our line of sight follows his, down towards the head of the defunct Goliath. That might give us some psychological insight since as spectators outside the frame in the real world we come up close against Goliath, whose head is uncomfortably close to our gaze. However, a closer look reveals that David’s eyes aren’t firmly fixed on Goliath’s head, but are unfocussed, staring into space. His isn’t a piercing glance, but almost sightless. It’s difficult to see in a reproduction, and it’s even harder in the gallery as the painting is covered by protective glass that reflects harsh museum lights, but David’s eyes are rheumy, unhealthy looking. Surely Caletti could have conveyed clear-sightedness in the hero, but instead he chose to plunge the youth’s eyes in shadow, which undermines the idea of a perspicacious David. Neither can vision be confidently connected with Goliath unless we associate sight via touch, an idea prevalent in Europe in the seventeenth-century – the age of Descartes, who wrote on this subject. The gnarled surface of Goliath’s head seems to invite our touching fingers, an idea hinted at by those tentative digits of David’s right hand which seem to be searching for a handhold on Goliath’s head.

Now let’s take a step backwards, rather as Calletti must have done when moving back from his easel to contemplate his painting in progress. The picture has been described: its iconography, colour scheme, and general expression. Points of view, both David’s and Goliath’s, which might symbolise modes of vision or its lack, have been considered in relation to the spectator. Perhaps it is now time for Caletti himself to enter and stand up upon the stage. Calletti’s painting is hung in a corner of the Birmingham baroque collection, and I have to confess that Calletti had backed me into an art historical corner. I didn’t know much about him, but I’ve discovered that he was “a minor painter” from Cremona who worked in Ferrara, and who seems to have been pretty dysfunctional when he wasn’t painting. Caletti is more well-known for his printmaking, and the British Museum have several prints, some of which have similar motifs to the Birmingham canvas. This etching shows a grim David purposefully striding forward with Goliath’s head, presumably on the way to Jerusalem. Unsurprisingly, the landscape doesn’t resemble the Holy land, more like Dürer, or even Venetian terrain. I read somewhere that Caletti rated himself a better painter than Titian, a claim that is manifestly ridiculous, and yet impressive in its arrogance. Though it’s dangerous to see painting as biography, I read something of Caletti’s own awkward character in his Birmingham David with the Head of Goliath. It isn’t a masterpiece, but it is a fine painting. The painter seems to be saying: “They might dismiss me as a Guercino cast-off, but I can produce good work when I put my mind to it.” He could, and did with this fascinating canvas, which deserves its long-overdue exposure to the eyes of the world.