A Collector’s Eye: Cranach To Pissarro at the 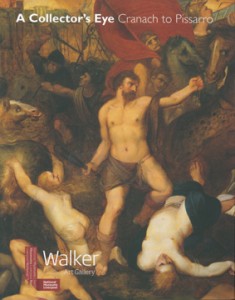 Detail of 'Battle of the Amazons' by Rubens from the Exhibition Catalogue.

While exhibitions that showcase a private collection can be the proverbial curate’s egg both in terms of the quality of the works on display and their attributions, this new exhibition is never anything but stimulating and thought-provoking. The works come from what is described as ‘the Schorr Collection assembled by private collector David J. Lewis for his family interests’ which is ‘one of the largest collections of Old Master paintings amassed in England since World War II.’ David Lewis remains an anonymous figure throughout, and the visitor learns nothing about the man himself, but as a patron of art his particular taste is clearly signposted in the thematic notices that divide up the exhibition. Lewis has had a ‘professional’ adviser, Christopher Wright (who writes a short introduction in the catalogue), but the selection is very much his own.

The geographical range of this collection is unusual: there is a large proportion of Spanish and French paintings, but none from England or Italy. Many are by artists little represented in British collections, such as the two large and elaborate still lives by the Valencian seventeenth-century painter, Tomás Yepes. What first greets the visitor, however, is less startling than these: four Impressionist paintings, including two by Alfred Sisley, although these are unrepresentative of the collection as a whole. Perhaps Lewis, like others, began by collecting Impressionist works before moving on to stronger meat.

The first thematic sections reflect that fact that Lewis is ‘fascinated’ by portraits and sixteenth-century religious art. This could be somewhat confusing for the uninformed visitor since within these themes there are few distinctions of chronology or school. What is particularly noteworthy, however, is the way Lewis apparently encourages technical investigation into for the works in his collection. This has allowed for some fascinating discoveries, such as the fact that a Portrait of Philip IV of Spain, always assumed to be the work of a follower of Velázquez, is in fact a signed work by Eugène Delacroix!

As to the paintings themselves, there is something for everyone. I was especially interested in the portraits and sixteenth-century religious works. There is a striking head of Pope Clement VII – one of many such works derived from Sebastiano del Piombo, but of unusually high quality and finish – and a full length version of a painting by Baron Gérard, the original of which is in San Francisco. The sixteenth century is especially well represented with works by Alessandro Allori, Anthonis Mor and Bartolomeo Passarotti. Standing out among the religious paintings is a Christ as the Man of Sorrows by the Antwerp artist Martin van Hemessen, which is pervaded by the spirit of the Catholic Reformation.

That said, the particular strength of the Lewis collection as it is presented here lies in seventeenth century painting, especially that of Spain, Italy, and above all France. The theme of paintings of philosophers is of particular intellectual and artistic interest, and includes portraits of various Greek sages by Jusepe de Ribera, Salvator Rosa and Luca Giordano. But it is the less well-known French artists who steal the show: there are at least two eye-catching paintings each by Philippe de Champaigne, Simon Vouet, Sebastien Bourdon and Pierre Mignard. Christopher Wright’s expertise in the French seventeenth century painting evidently played a part in their selection.

Commendably, Lewis he does not keep his collection to himself, although he has hitherto hidden his light under a bushel. Once described as the property of an anonymous lender, a handful of these paintings normally hang in the Walker Art Gallery anyway, and there are four or five that are on long-term loan to the Barber Institute in Birmingham. Lewis has also lent his paintings worldwide, and they can be found from Tel Aviv to Williamstown (Mass.). Perhaps there is an opportunity here for Australian public collections to negotiate some long-term loans?

The one drawback to this exhibition is that it leaves the viewer wanting to know more about the collection and about Lewis himself. What is presented in Liverpool is only a selection (60 out of 400 works) and there is no indication of what the rest of the collection consists of. The catalogue is more of a commemorative pamphlet than a scholarly resource, with little detail and no information about provenance. Given the scarcity of published catalogues of British collections outside London this is an unfortunate omission.

For those unfamiliar with the Walker Art Gallery, A Collector’s Eye should provide the icing on the cake for a visit to what is arguably the best permanent collection outside London.