Love and Devotion: From Persia and Beyond 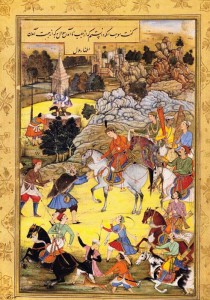 Love and Devotion: From Persia and Beyond, State Library of Victoria, Keith Murdoch Gallery, until 1 July 2012.

Illustrated manuscripts from Persia, Ottoman Turkey and Mughal India are rare treats in Melbourne. Love and Devotion: From Persia and Beyond presents a modest but varied collection of manuscripts drawn mostly from the Bodleian Library, University of Oxford, covering the period between the thirteenth and eighteenth centuries. The subject matter is both profane and sacred, familiar secular stories such as One Thousand and One Nights giving way to stories of love and illustrations of the natural world representing the divine.

I suspect that most viewers, like me, approach these manuscripts tentatively, because the images they contain appear so different from those one is accustomed to meeting in traditional art histories. For instance, many of the folios on display combine images with text: an image is typically contained within the frame of a folio, and within that frame the cursive script of Arabic or Persian is corralled into smaller frames. Sometimes the image breaks through the frame, or the boundary between the text and image is unclear. The style of the images could also be described as naive, yet simplicity in an image is an advantage when complementing text because the flow of reading the text is less likely to be interrupted. A shallow picture plane also brings a story closer to the viewer, such as the image of a man (said to be distracted by love) falling from a balcony (Fig. 1). So in looking at these pages, we should not deal with the images separately, but concurrently with the text, folio and the manuscript as a whole.

To begin to interpret these manuscripts more fully, some awareness of Persian, Ottoman and Mughal cultures is necessary. These cultures could be described as ostensibly Islamic, but steeped in other traditional, cultural and religious beliefs and practices. The first aspect of these cultures which is made clear in the exhibition is an awareness of their pre-Islamic past. Persia was conquered by Alexander the Great (Iskandar) in the fourth century BCE, and by Arabs in the seventh century. The Shahnama (Book of Kings), completed by the poet Firdausi at the start of the eleventh century, tells the story of the rulers of Persia until its defeat by the Arabs. The Shahnama not only recognises Iskandar but celebrates him by recognising his legitimacy. In one example, Iskandar cradles the dying Persian king Darius in his arms, a symbolic representation of succession (Fig. 2). So it is misleading to interpret these folios exclusively through the prism of Islam, since the pre-Islamic culture and religion of Persia, like Zoroastrianism, lies not far from the surface. Similarly, Turkish people are descended from nomadic peoples of Central Asia. Despite centuries of Islam, many superstitions deeply entrenched in Turkish culture can be attributed to its shamanistic past. (In Turkey, the only thing more prevalent than the national flag is the ubiquitous ‘evil eye’.)

The second aspect of these related cultures is a belief in the direct connection between earthly and spiritual realms, most fully expressed in Sufism. Developed in the centuries following the time of the Shahnama, Sufism is a form of Islam which believes in spiritual enlightenment through earthly means, such as love. It is not always apparent from the manuscripts whether the theme of love includes sexual love, but around the beginning of the thirteenth century at least, the Sufi master Ibn Arabi believed that it was entirely consistent with, and indeed a means to, the divine. The romantic but tragic love story of Layla and Majnun is said to have been taken by Sufi poets like Jami and transfigured into a meditation on the journey of the soul towards God. This means the lovers in the stories displayed in the exhibition take not just the world on their shoulders, but the heavens too. The various representations of the natural world also take on divine significance. Mantiq al-Tayr (Conference of the Birds) by the Sufi poet Attar, beautifully represented here, tells a similar story in which the journey of the birds represents a journey towards God (Fig. 3).

The Mughal manuscripts are generally more naturalistic than the earlier Persian or Ottoman examples. The image of a dervish and the king, for example, more clearly conveys a sense of movement, and the rural setting into which the figures are placed displays depth (Fig. 4). Interestingly, it has been suggested that because Mughal India was farther from Europe than Ottoman Turkey, the Mughals were more open to incorporating European artistic practice than the Ottomans, who perhaps felt more threatened politically and culturally.

The exhibition concludes with examples of the accounts of European travellers to Persia, most notably during the seventeenth century, and an analysis of the absorption of Persian culture into European literature. The most significant examples on display are Goethe’s West-East Divan, inspired by the fourteenth century Persian poet Hafiz, and Edward FitzGerald’s translation (and reinterpretation) of the same poet which proved immensely popular in the nineteenth century: the The Rubáiyát of Omar Khayyám. It is also explained that Persian themes entered European literature earlier. The basis of Sufism, the everyday as a path to the divine, is said to be echoed in Dante’s Divine Comedy and Chaucer’s The Parliament of Fowls, examples of which are included in the exhibition. 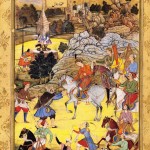 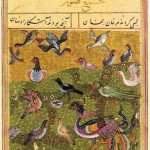 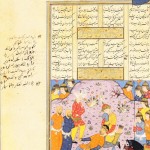 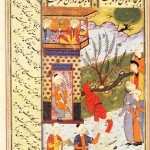