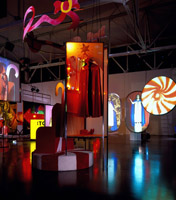 A pop-up lecture cycle on the life and work of celebrated Los Angeles contemporary artist Mike Kelley delivered by co-director of the Mike Kelley Foundation for the Arts and Kelley scholar, Professor John C. Welchman, University of California San Diego. The cycle of three public lectures are a collaboration between Monash University, National Gallery of Victoria and the University of Melbourne.

Mike Kelley’s epic Day is Done (2005) or Extracurricular Activity Projective Reconstruction #2–32 (2004–2005), takes the form of a rambunctious musical-cum-vaudeville video review chopped into thirty-some choreographed numbers and distributed across a series of twenty-five sculptural viewing stations, that are also locations and para-architectures, composed of props from each shoot. Continuing and complicating Kelley’s investigation of the relation between memory, repression and architectural and institutional space that commenced with Educational Complex (1995), the project interrogates a compelling range of locative conditions in the off-duty construction of extra-urban Americana. On a performative level, Day is Done is a cross between low-end community theater, free-fall pantomime, and off-Broadway musical—trading in dozens of sonic forms from church organ to hard-core rap, from techno to tambourines; from the point of view of the structures it appropriates, invents and repurposes, Day is Done conjures up a critically paranoid vision of the niches and micro-spaces inhabited by provincial leisure practices, in order to offer a disturbing commentary on the core of vernacular America. Presented by MUMA and the Graduate Fine Art Program, MADA.

Conceived in 2005 in collaboration with ArtAngel (London), Kelley’s first and last public art project, Mobile Homestead, was inaugurated at the Museum of Cotemporary Art, Detroit  (MOCAD) in September 2010 with the unveiling of a mobile home modelled after the suburban house in which Kelley was raised. Work on a permanent replica of the house—to which the mobile component will be docked—located on a site adjacent to MOCAD, commenced in summer 2012. The home will be used for temporary exhibitions, community projects and as a home for the education department of MOCAD. Three feature-length videos documenting the homestead’s journeys to and from the “mother ship“ house along Detroit’s ethnically diverse Michigan Avenue premiered in May 2012 at the Whitney Biennial, which was dedicated to Kelley. “Perhaps the failure of the Mobile Homestead project  . . . after being filtered through the institutions of the art world and community services,” he noted in the Whitney catalogue, “is successful as a model of my own belief that public art is always doomed to failure because of its basic passive/aggressive nature.” Presented by the National Gallery of Victoria in collaboration with the School of Culture and Communication and the Victorian College of the Arts, The University of Melbourne

Mike Kelley and the Comedic

Comedy and its numberless affiliations, liaisons, and progeny are as important to the work of Mike Kelley as to the practice of any artist in the current generation—or, for that matter, any artist working during the last century. The comedic resources that define and disorder Kelley’s inter-generic projects with corrosively insistent bravado include parody, irony, and caustic satire; black and blue humor; farce and unstinting word-play. Throughout Kelley’s performance work, beginning around 1976, and later video-based pieces culminating in Day is Done (2005), it is equally clear that the artist’s acid tongue, vented in a legion of voices and surrogates, found its most chiseled groove when planted firmly in the cheek. Kelley invested his pervasive senses of humor in even the most recalcitrant of objects, including performance props and other found or “assisted” materials. He was part, in fact, of a select band of modern and contemporary artists who have somehow infiltrated sculpture or three-dimensional forms with a mischievous comedic substrate. Kelley laid down an early marker on this satirical trail with a sequence of opaquely absurdist birdhouses, the formal elaborations of which are deviously yoked to gratuitously highfalutin religious principles or the unstable machinations of common wisdom. Presented by the Ian Potter Museum of Art in collaboration with the School of Culture and Communication and the Victorian College of the Arts, The University of Melbourne

John C. Welchman is Professor of art history, theory and criticism in the Visual Arts department at the University of California, San Diego. He is also Founding Director of the Mike Kelley Foundation for the Arts, and Advisor, Rijksakademie van Beeldende Kunsten, Amsterdam. His books on art include Modernism Relocated: Towards a Cultural Studies of Visual Modernity (Allen & Unwin, 1995), Invisible Colours: A Visual History of Titles (Yale, 1997) and Art After Appropriation: Essays on Art in the 1990s (Routledge, 2001); he is co-author of the Dada and Surrealist Word Image (MIT Press, 1987) and of Mike Kelley in the Phaidon Contemporary Artists series (1999); and editor of Rethinking Borders (Minnesota UP/Routledge, 1996). His most recent book is On the Beyond: A Conversation between Mike Kelley, Jim Shaw and John C Welchman, ed. John. Welchman, [Kunst und Architektur im Gespraech/Art and Architecture in Discussion] (Vienna and New York: SpringerWienNewYork, 2011). He is also finalizing two books on the relation between art, film and the representation of faces (The Celluloid Face and Faces and Powers); and a monograph on Mike Kelley.

← Forum and Exhibition Viewing | The Four Horsemen: Apocalypse, Death and Disaster at the NGV
Philosophy Short Course | Perspectives on Napoleon →