News, Writing and Reviews on Art and Art History 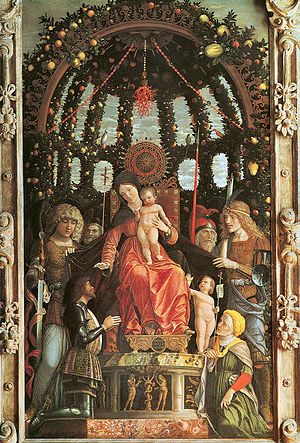 Is that a cockatoo I see? Andrea Mantegna,1496, Tempera on canvas, Louvre Museum, Paris

Ron Radford, director of the National Gallery of Australia, has announced his plans to retire. He will step down from the role in September. He has been director since 2005. More here.

An article in The Guardian about the work of Heather Dalton from the University of Melbourne that proposes that there is a sulphur-crested cockatoo in Mantegna’s Madonna della Vittoria (1496). I think I am keeping my sceptical hat on for this one – though I am intrigued and would like to read the full research. One commenter on The Guardian seems to have solved it though saying – “All this proves, is that the Italian cockatoo is extinct.”

The NGV has announced it will be holding an NGV triennial for contemporary art and design. Tony Ellwood said, “Melbourne Now has been a catalyst for a new approach at the NGV, allowing us to open up possibilities for creative collaborations between artists, curators and the public. This Triennial allows the NGV to take the exploration of contemporary art and design to the next level, and to evolve the ideas we began to explore in Melbourne Now.” Read more here.  Also a reminder that it is the last weekend of Melbourne Now at the NGV.

A post from art historian Tina Rivers on teaching students to look at art – “They’re accustomed to thinking of art as something that is “open to interpretation” and, more broadly, of the humanities as being opposed to the sciences. This means that they struggle with the concept that there is such a thing as an interpretation of a work of art that is more plausible than others, and that they don’t know how to tell the difference between a defensible interpretation and one that’s not really defensible, or is a “stretch.”

Bendor Grosvenor has a round up of comments about blockbuster exhibitions in art galleries. Are so many necessary? Does the travel damage the art? Do they reduce people’s engagement with permanent collections?

Jill Burke has a fascinating short post on tips for body hair removal for sixteenth-century women.

A post I was nodding along in agreement with from the Grumpy Art Historian arguing that much photography in museums (often held up in excitement by museum directors as ‘engagement’) is ‘the substitution of a boringly familiar activity for the transcendent pleasure of engaging with art.’ I’m not opposed to people taking a photo or two but I have to agree with this, too much of it is just ‘snap and go’. What are your thoughts?