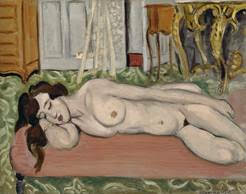 In the course of his long career, the French artist Henri Matisse (1869-1954) repeatedly looked at non-Western art for inspiration. Japanese prints, Persian and Indian miniatures, Byzantine icons and mosaics, Chinese brush paintings and art theory, and textiles from across the world, all inspired him at one time or another. Among these varied exotic art forms, Far-Eastern art—Chinese and Japanese–played a unique part in the artist’s career, one coming at the beginning, the other at the end of his career. Both Chinese and Japanese art affected his approach to, and his thinking about, art. But while Japanese art shocked him into an entirely new way of thinking about the relation between representation and reality, Chinese art and, especially art theory, confirmed ideas about art that he had developed and nurtured in the course of fifty years.

Professor Petra Chu is a renowned expert on nineteenth-century European art. She is a Professor of Art History and the Director of Graduate Studies in Museum Professions at Seton Hall University. She has published several books on Gustave Courbet and is the author of the leading survey of nineteenth-century European art. She is visiting Australia as the recipient of an International Research Collaboration Award from the University of Sydney, and will be based in Sydney from the 21st of February until the 21st of March 2015 where she will be working with Professor Jennifer Milam on a project entitled ‘The Other Orient’.