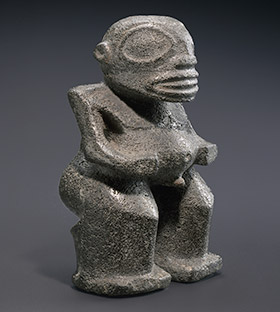 This is a ‘pre-print’ version of a review to be published by the University of Hawai’i Press in The Contemporary Pacific (vol. 17 no.1) in early 2015.

Atua: sacred gods from Polynesia is on at the National Gallery of Australia, Canberra from 23 May – 3 August 2020

As you pass between the split-text panels at the entrance to Atua: sacred gods from Polynesia, your first encounter is with two semi-abstract totemic figures from a ritual sanctuary or marae, carved by contemporary Cook Island artist Eruera Nia. Embedded in a low, square, grey plinth, these silver-weathered woodenarabesques or parentheses are at once descriptive and abstract, hieratic and dynamic, leaping up into vision and consciousness in a manner comparable to that of the Gallery’s modernist masterpiece, Constantin Brancusi’s Birds in Space. Then, as you turn right to enter the exhibition proper, you are confronted with another couple of related figures, this time two Tongan ceremonial clubs whose tall, narrow staves fan out at the top into lethal, skull-splitting wedges. The inlaid marine ivory of the one and reflected light from the other’s richly lozenge-carved surface scintillate, like navigators’ stars or drifting sea spray.

On first encounter the profound formal refinement, the natural elegance of these two pairs of objects has immediate appeal to a contemporary western sensibility, and this seductive frisson of aesthetic near-recognition repeats again and again as you proceed through the installation. For example, an Hawaiian figure of the god Maee or Mo’i crouched on all fours weirdly pre-echoes Jacob Epstein’s arch-backed Woman possessed, another of the NGA collection’s great twentieth-century European sculptures. Indeed, through the lens of this exhibition Polynesian culture is revealed as a powerful presence within the Gallery, and not just in John Webber’s A chief of the Sandwich Islands, the historic oil painting which introduces the settler-Australian collection. The beaked head of a Max Ernst sculpture in the building’s entrance foyer, Habakuk, alsoresonates with that of a Rapa Nui (Easter Island) bird-man, while on the ground floor a vitrine full of surrealist pictures and objects has been assembled on the basis of a kooky 1929 map of Le monde aux tempes surréalistes, a fantastic projection which includes both a very wobbly Pacific equator and a vastly hypertrophied Rapa Nui, given the coastline-outline of a rampant bear-monster. 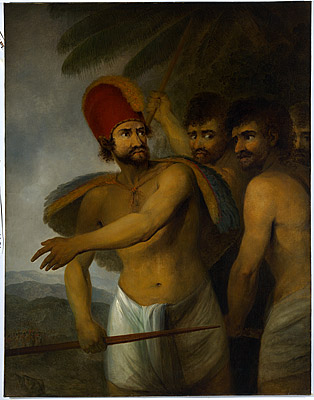 More abstractly, the meaty, three-dimensional geometry of many of the carved figures, especially those from Tahiti and Fiji, recalls to mind the robust modernist physiologies of Cézanne, Matisse, Picasso et al, while the whorls of moko on various New Zealand carved heads not only synthesise natural geometries of palm fronds, shells and feathers, but also repeat (anachronistically, through a glass, darkly) the exuberant linear patterning of Anglo-Saxon and Gothic manuscript illustration.

Yet despite an immediate recognition of the primal power (and even beauty) of Pacific art, the explorers, missionaries, whalers, traders and eventually artists of the west signally failed to comprehend Pacific Islanders’ elaborate cosmology, with its regularly repeating duality of migration and settlement, of the stranger and the ancestor, of the vaka (canoe) and the marae (sacred enclosure), and, its periodic transfers of power between the foundational sea god Tangaroa, war gods Tu and Rongo and Tane, god of the forest. It is a failure amply demonstrated soon after first contact by Captain Cook himself, the solecism of his return to Hawai’i at the wrong moment in the ritual calendar ultimately resulting in the great navigator’s death at Kealakekua Bay. More generally, there is a profound disjunction between the popularly received or inferred impression of pre-contact Polynesian lifeways as all ‘luxe, calme et volupté,’ as a sunny and pacific experience of natural bounty and consequent native indolence (and concupiscence), and a very different reality accessible through historical documents, anthropological deduction and oral tradition: that of an inherently expansive network of aggressive warrior societies, of powerful ariki (aristocracies) and priesthoods, and of slavery, human sacrifice and cannibalism. Behind the philosophical myths of noble savagery and sailors’ erotic tales of willing wahines lie much less comfortable, even violent stories of invasion, oppression and death.

Atua is demonstrably more in tune with this prehistoric darkness. Indeed, curator Michael Gunn displays an eccentrically intense sensitivity to his charges, and it is said that the arrangement of the different gods, the placement of the sculptures in relation to one another, was based as much on his intuition of inter-deity ‘personal’ relationships as on historic or aesthetic principles. He even staged a ceremony prior to the opening in which a canoe-figure portrait of Maori warrior Te Rauparaha was made ‘king’ of all the atua in the exhibition, to ensure a peace for the duration. As Gunn told Sydney Time Out magazine: ‘We were a little worried, when you’ve got a whole gallery full of lively figures. We were hoping that they wouldn’t brawl – and so far they’ve been fine because they’ve got a leader.’ 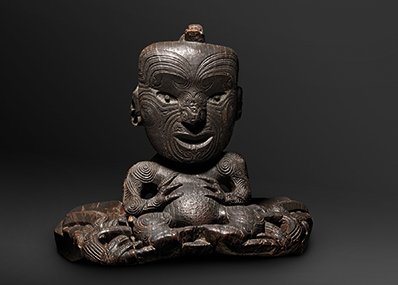 While this level of curatorial engagement may be taking things a wee bit too far, Gunn’s immersion curation has resulted in a show which is not only archaeologically, anthropologically and historically well-informed and aesthetically highly alert, but which succeeds in conveying something of the ferocious little totems’ original power, their mana.

Text panels inform the viewer that sometimes the carvings and containers are themselves the god, sometimes they are bodies or vessels within which the god occasionally resides, and sometimes they are spiritually inert, mere images or representations. But whatever their particular religious history or status, they are all pretty potent. The fierce machismo of the Polynesian gods and ancestor-heroes (and, like the Roman Caesars, the latter often transmuted into the former) inheres in their very shapes. The cranial curvature and strong jawlines of atua from the Austral, Society and Cook Islands contain a powerful suggestion of the head of an erect penis, and there is something equally visceral in the deeply undercut, repeated patterning of ‘staff gods,’ with their suggestion of exposed vertebrae or ribs. Dominance and control also appears to be the semiotic subtext of a group of seated-god canoe ornaments from the Marquesas, saucer-eyed, tattooed ancestors whose feet rest upon tiny figurines – prisoners of war or descendants – as upon a car’s accelerator and clutch pedals. 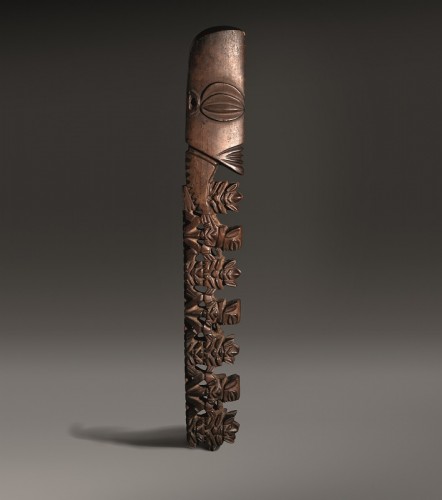 Perhaps less bellicose but rather more nightmarish are a surrealist-mutant Society Islands double-headed figure, another from the Gambier Islands with a human head and torso atop four legs, and the god-reliquary A’a from the Austral Islands, its fertility function expressed in 30 little homunculi sprouting from and crawling over its head, body and limbs. Remembering that 1929 surrealist map, it is perhaps appropriate that amongst the exhibition’s most bizarre-oneiric sculptures are those originating from from Rapa Nui: elegantly-curved eighteenth-century figures rocking or floating in space like canoes on a wave or frigate-bird feathers drifting in the air; hybrid bird-men and lizard-men; skeletal-ribbed, grimacing Moai Kavakava spirit beings; and a couple of dry-cadaverous bark-cloth ‘revenge figures’, terrifying in their Raw Graphics-David Lynch metaphysical expressionism. 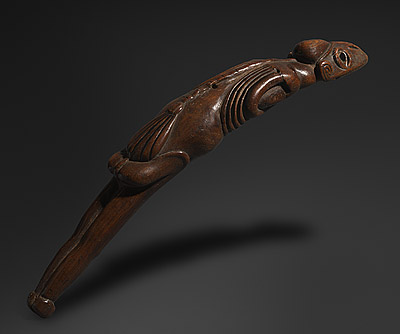 The show is not without flaws. The gallery’s low lighting levels may increase the visual drama, the tapu-spookiness, but they reduce the visibility of detail, which is a significant frustration in the case of finely carved works such as the Rapa Nui figures, the Marquesan ‘U’u club and the tattoo-inscribed New Zealand heads. The exhibition design is pretty dreadful, a half-hearted, anaesthetic affair of dull (oceanic?) blue colourways and of heavy, inelegant plinths and boxes and cases. It all feels a bit like a warehouse – the infinite store-room of Raiders of the Lost Ark, perhaps. And despite a quite extraordinary range of loans (works come from more than two dozen sources, including major institutions in Great Britain, France, Belgium, Switzerland, Italy, Germany, Russia, the United States, French Polynesia and New Zealand), there is unfortunately no example of a Rapa Nui stone moai – what a pity the British Museum’s Hoa Hokananai’a could not be made available. Finally, for some viewers the most unfortunate aspect of the exhibition must be that apart from the Eruera Nia sculptures and a handful of its catalogue texts, Atua conveys little sense of the continuing vitality of indigenous Pacific cultures. 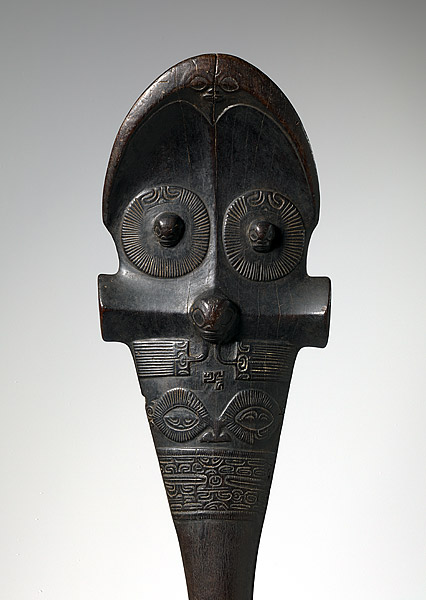 Still, in this case a restricted, exclusively historical presentation makes a great deal of sense. In its relatively modest scale (there are fewer than 80 objects, plus a European epilogue of Webber engravings and a book of tapa cloths collected on Cook’s voyages), the exhibition clearly testifies to the rapid and fatal impact of Christian missions on the 1,200 year old Polynesian culture. From the first decades of the nineteenth century, throughout the islands, missionaries’ strategic conversion of the most powerful chiefsled to wholesale destruction of thousands of atua, their reliquaries and their marae; as Michael Gunn notes in his introduction to the catalogue, ‘all the images of Rongo and Tane were destroyed, three or four images of Tangaroa have survived as shapeless pieces of whalebone or wood, and perhaps two or three images of Tu remain.’  This almost universal Pacific iconoclasm was a massive artistic tragedy; its relatively few survivals are accordingly precious, and warrant close attention without the distraction of contemporary identity politics.

In the end, Atua is a moving memorial, both to the rich material culture of Polynesia in the eighteenth and early nineteenth centuries and to the catastrophic effects of western imperialism. Itis an important reminder that the islands of the Pacific Ocean loom as large as the 1929 Rapa Nui in the map of the Australian imagination: from the voyages of Captain Cook to Samuel Marsden’s missionary and trading engagements with New Zealand to the great Fiji rush of the 1870s; from colonial participation in the Maori Wars to national leadership of the RAMSI peacekeeping mission in the Solomon Islands; from Bernard Smith’s European vision and the South Pacific to Greg Dening’s Beach Crossings.It is also an aesthetically demanding, intellectually challenging museum experience, a powerful evocation of the beauty and the terror of the wide blue sea.