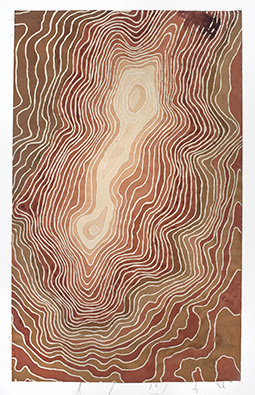 Indigenous artist Judy Watson’s installation, the scarifier, at TarraWarra Museum of Art in the Yarra Valley, responds to the history of the Coranderrk Aboriginal Station near Healesville (1863-1924), which was located not far from where the exhibition is being held. Exhibition curator and TarraWarra Museum of Art Director Victoria Lynn said the Museum commissioned Judy Watson to create the installation to coincide with itsPanorama exhibition, which presents a suite of landscape paintings from the Museum’s collection. ‘In this context it was important to provide audiences with a self-reflexive understanding of the Museum’s location on Indigenous Country. Judy’s evocative and deeply moving installation brings Indigenous and non-Indigenous memories of the local landscape to life. In combination with the Museum’s Panorama exhibition, Judy Watson’s installation of paintings, bones, soil, saplings and clothing provides a creative perspective on the scars and psychological impact of the relationship between Indigenous people and the colonial landscape,’ Ms Lynn said.

Watson’s Aboriginal matrilineal family are from Waanyi country in north-west Queensland and in this new work she collaborates with local Wurundjeri people, working with stories and memories of Indigenous Country. The installation captures an intimate and powerful evocation of daily life at Coranderrk. Watson’s research of Coranderrk Aboriginal Station examined the productive hop plantation at the Station, alongside the minutes of evidence, a documentary record of the 1881 Parliamentary Inquiry into conditions and management at Coranderrk. Her work follows the lines of emotional and physical topography that centre on particular places and moments in time.  Several new paintings invoke both the detailed work of the scarifier as it followed the plough and incised the landscape, along with the topographic view of Country. Judy Watson describes it as ‘The scarifier follows the plough. It evokes images of cutting into the ground and the body, leaving wounds, mark-making as it traces the contours of country and blood. Words and actions imprint deeply within the psyche. Descendants carry the scars and memories of their ancestor’s stories.’

Judy Watson co-represented Australia in the 1997 Venice Biennale with Emily Kame Kngwarreye, Yvonne Koolmatrie, she was awarded the Moët & Chandon Fellowship in 1995, the National Gallery of Victoria’s Clemenger Award in 2006 and, in the same year, the Works on Paper Award at the 23rd National Aboriginal and Torres Strait Islander Award. In 2011 her exhibition waterline was exhibited at the Embassy of Australia, Washington, DC. In 2012 she exhibited in the Sydney Biennale and in 2015 was the recipient of the Australia Council Visual Arts Award.