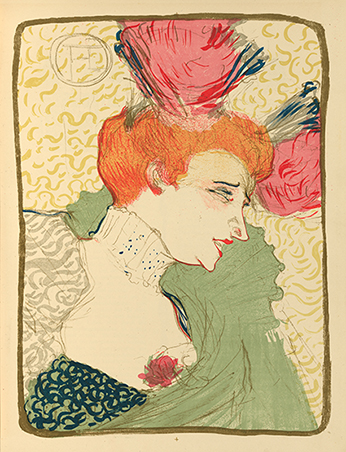 The exhibition Impressions of Paris: Lautrec, Degas, Daumier, Atget is now open at the Monash Gallery of Art. The exhibition features over 120 prints, posters and photographs drawn from the collection of the National Gallery of Australia. The exhibition focuses on the work of artists Honoré-Victorin Daumier (1808–1879), Edgar Degas (1834–1917), Henri de Toulouse-Lautrec (1864– 1901) and Eugène Atget (1857–1927). Lautrec, Degas and Daumier were consummate draughtsmen whose innovative compositions and embrace of modern subject matter played a significant role in artistic developments in France over the nineteenth century. Atget, the only specialist photographer among these artists, spent much of his life documenting the streets of Paris as they underwent modernisation. The generation of French artists who followed Daumier in the nineteenth century were inspired by his critical observations, which became an extraordinary reservoir of ideas. Both Degas and then Lautrec were enthusiastic admirers of French caricature, delighting in its animated qualities, stylistic freedoms and contemporary themes. They were particularly enamoured of Daumier’s caricature. Degas adopted themes of modern French life, the ballet, the race course, the café-concert and the demi-monde and played an important role in the rejection of mythological and historical subjects favoured by the Impressionists. Many of Degas’ ideas on composition and subjects were, in turn, drawn from Daumier. This French satirist was both extraordinarily gifted and prolific, making a name for himself by lampooning the affectations, stupidities and greed of members of the French bourgeois society in caricatures, which Degas avidly collected.

The youngest of the artists, Lautrec, who died before reaching 37, borrowed themes and compositions from Degas, an artist he much admired and emulated. Images of drinkers at a table, ballet and cabaret scenes and nudes reveal the powerful influence that Degas had on the younger artist, as well as Lautrec’s own considerable originality, particularly as a portrayer of individuals rather than the depiction of types often favoured by Degas. For the most part, Atget’s pictures of streets, parks, courtyards, buildings and their ornamental motifs record remnants of Old Paris. While there is a nostalgic aspect to these views, for contemporary viewers these pictures were about modern Paris. They recorded and helped make sense of changes to the city as it struggled to cope with modernism. Atget’s views of modern Paris focused on its intimate places, those spaces of the everyday in which people had always worked, loved and lived.

FLOOR TALKS | Every Tuesday 12pm, beginning 28 JULY 2020 | FREE No bookings required Get up close to the works of Daumier, Lautrec, Degas and Atget. Led by curators, educators and invited specialists these floor talks will focus on general themes and specific works of the four artists.

MGA will present floor talks with AUSLAN-interpretation and native French-speakers during the exhibition period. Dates to be advised. For more information please contact MGA, ph 8544 0500