In Search of the Picturesque: The Architectural Ruin in Art 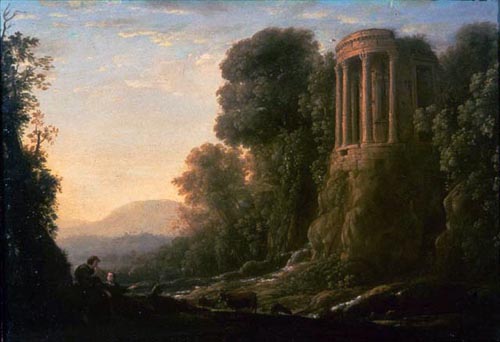 Claude Lorrain, River Landscape with the View of the Tiburtine Temple at Tivoli, c. 1635. National Gallery of Victoria.

In Search of the Picturesque: The Architectural Ruin in Art at Geelong Art Gallery (closing this Sunday 24th June).

I have finally caught up with the exhibition In Search of the Picturesque: The Architectural Ruin in Art at Geelong Art Gallery (closing soon on 24 June) so go quickly if you haven’t done so already. This exhibition showcases Colin Holden’s collection of Old Master prints, to which have been added loans of paintings from the National Gallery of Victoria and Art Gallery of South Australia, prints from the State Library of Victoria, and various items from the Geelong Gallery collection and other sources. In the main room it is good to see some old favourites brought together: from the NGV there is the Panini Cumaean Sibyl (no. 27) the Bellotto View of the Forum (no. 1) and the Claude Lorrain River Landscape with the View of the Tiburtine Temple at Tivoli (no. 4) (Fig. 1) From Adelaide is the Claude Lorrain Capriccio with ruins of the Roman Forum (no. 3). These are seen to better advantage here than in their original homes, being hung at a good height in a moderately size room, although the NGV pictures are glazed. (The Panini comes off best in the comparison, the handling being exceptionally subtle, and autograph throughout.) These paintings serve to structure each wall, a useful device for a print exhibition. (It reminds me of the recent Claude drawing exhibition at the Louvre, which was punctuated by occasional paintings related to the drawings on show.)

The works are grouped under various headings: The Temple of the Sibyl and other ruins in the ancient world, The ruin and symbol: moral and religious themes; Art transcending archaeology: Piranesi’s Vedute di Roma; Gothic ruins; and An Australian perspective.  The catalogue takes the form of a handlist and an overview essay which, while no doubt a practical solution for a small and presumably modestly funded exhibition, is a bit frustrating if you want to learn more about a particular work. This is a point I will pursue, since I am not convinced, as many gallery directors and marketing managers seem to be, that audiences only want generalities. The visual arts live through their particularity, and an exhibition is well suited to doing this by juxtaposing works in such a way as to establish concrete visual relationships that lead to a deeper understanding.

In this respect the first dealing with the Temple of the Sibyl at Tivoli works best, although the emphasis on the picturesque in the title banner as you enter and the first group clustered around David Roberts lithographs of Baalbek and the Holy Land rather confuses the issue. This section is dominated by fine impressions of Piranesi’s three late views of the so-called Temple of the Sibyl at Tivoli (1761; no. 5 (Fig. 2)), accompanied by other prints with a Tivoli theme (it is unfortunate that the NGV Claude could not be more tightly integrated with these). With works like these Piranesi transcends the genre of the topographical print to produce works that have the physical presence of paintings. This view showing the substructures is interesting because this was a view found often enough in the sixteenth century (for example by Willem van Nieulandt, Fig. 3) but which tends to disappear from sight in favour of the isolated temple. The pergola (a version of which is still there) is fascinating to study at close quarters, as are the bizarre figures and inorganic foliage. But what intrigues me most is what is happening between the two leftmost columns of the temple. Seen in close up we seem to have one of those spatially ambiguous features common to Piranesi’s Carceri (Prisons), since the wall of the cella seems to be floating in front of the columns. Stepping back at little it becomes apparent that it is in fact a rational description of a fragment of wall with windows and other openings stuck onto the outside of the columns.

If we look at the corresponding area in an interesting horizontal formal print by Willem van Velde II (no. 19 (Fig. 4)), which shows the temple from further to the right, you can see the same feature, but there is more of it and it goes all the way to the entablature, although you can see the irregular line that marked its top edge in Piranesi’s day. You can see from this that the lower part was in fact bulked up in front of the columns, but the upper part is set at the level of the back of the entablature. Van de Velde’s print is based on one of two nearly identical drawings by Jan Brueghel the Elder of 1593 (Plymouth, City Museum and Art Gallery and Paris, Institut Néerlandais) (Fig. 5) which he copied in a print (British Museum, AN1078613001). (Or so a quick investigation informs me: this is why catalogue entries are useful: done properly, they tell you this kind of thing, which is a great help once you start asking questions, as any spectator should). This feature is often eliminated, presumably because it was untidy and in response to an idealising impulse that would culminate in the imitations of the temple perfected that punctuate eighteenth-century gardens. Claude usually cleaned it up in this way, as we can see from the NGV picture (Fig. 1) (where the view is reversed).

What is interesting in the van de Velde print is the way it is inserted into a landscape that completely ignores what was the most significant feature of the temple for most visitors and artists: the fact that it was perched on the edge of a cliff (Fig. 6). This is probably not simply because van de Velde never went to Italy, but because the Jan Breughel drawing gives no hint of it: there was nothing prompting van de Velde to place it on a cliff. Instead he placed it in a landscape of extraordinary additiveness that responds to the painters active in Rome in the first two decades of the century who took as their point of departure Adam Elsheimer (whose work he copied in prints), Gottfried Wals, Filippo Napoletano and Jan Pynas. Next to the temple Van de Velde has placed a pair of figures on a winding road like Napoletano leading to two further figures between tall rounded trees like Wals. He has looked to a different but related source for the right half, we were find rounded trees reflected in still water, an Elsheimer invention and almost a cliché in the work of Jan Pynas. Across the right foreground is a weir, which may also come from such sources as these, although it may be drawing on the Dutch tradition as well.

These Elsheimer-follower derivations are interesting because there is a painting in Prague, usually attributed to Filippo Napoletano (Fig. 7), that may reflect a lost Elsheimer composition. This places the temple emphatically on a cliff face, and plays up the lake, which was actually there but not quite in this position. A version of this composition was certainly known to Claude, since it underpins his River Landscape (Fig. 1) although Claude was uninterested in the lake. Van de Velde’s stretch of water seems not to come from this source, but from those cited above. In other words, van de Velde’s understanding of landscape painting in Rome at this time was only partial and derived from drawings and prints. As a result his treatment of the Temple of the Sibyl theme is delightfully idiosyncratic.

The unity of the second section (The ruin and symbol: moral and religious themes) is less obvious, and demonstrates the need for more exposition, since some of the works are quite arcane in theme, and what connects them may be little more than that they feature some ruins in the background. The section ‘Art transcending archaeology: Piranesi’s Vedute di Roma’ is in fact a further selection of some of the more powerful of Piranesi’s Vedute di Roma from the State Library of Victoria placed downstairs, unframed behind glass doors. This makes studying them less enjoyable than those on the Tivoli wall. The section ‘Gothic ruins’ is the only one to warrant the term ‘picturesque’ prominent in the exhibition title. The last section in the second room (‘An Australian perspective’) is more adventurous in that it attempts to Australianise this most Eurocentric of themes. The paintings by Russell Drysdale and Margaret Olley, like the paintings in the main room, add a welcome touch of colour and scale, and derive their conceptual legitimacy from Donald Friend having described the Colonial mansion of Merioola in Sydney as a ‘Piranesi ruin’. Yet the European ruin tradition is not primarily about the strange (or picturesque) appearance of damaged buildings. It is concerned with past greatness that persists not in spite of the fact that buildings are ruined, but because of it: if they were not ruins, they would not tell us about the greatness of the past, because they would belong to the present. There is a better fit with the Norma Bull etching and aquatint (no. 56) of Port Arthur (Fig. 8). It may not be greatness that first comes to mind when we visit (or see representations) of this colonial prison camp; but we do wonder about the values of the vanished civilization that created it, a civilization that has fallen into ruin during some intervening Dark Age that seems to have been left out of the history books.

Many of the works in this section are in fact wholly embedded in the European tradition, and belong better with those in the first room, above all the etchings and aquatints of Lionel Lindsay, so it is perhaps provincial to insists on his Australianness. From a distance his San Lorenzo, Rome (no. 65, 1928; i.e. the temple of Antoninus and Faustina, or S. Lorenzo in Miranda (Fig. 9)) or A church in the Roman Forum (no. 64, 1927; i.e. the temple of the Deified Romulus that forms the apse of SS. Cosma e Damiano (Fig. 10)) look like the photographs of the Forum in the first room (perhaps there are reasons for this). But looking at the blank wall above the doorway in A church in the Roman Forum from close to we are confronted with a symphony of squiggles, dots and dashes that will never be found in a photograph. Lindsay here is tackling, with considerable success, exactly the same task that Panini, Bellotto, and Piranesi had tackled before him: the task of devising a graphic convention to convey what is pictorially fascinating about irregular, weathered structures. 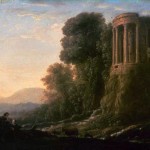